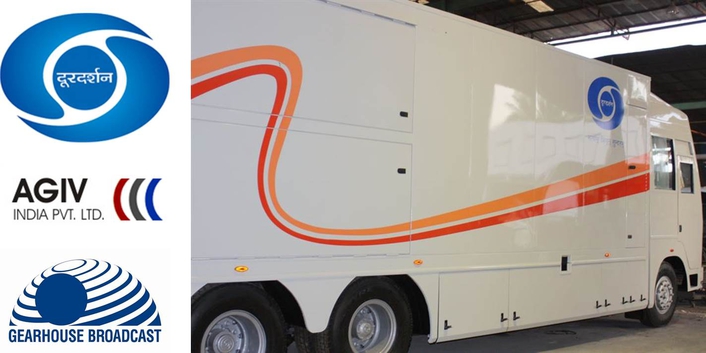 The two 11.5m long trucks have been designed by Gearhouse Broadcast’s Systems Integration team with flexibility in mind, allowing Doordarshan to use them for a wide range of productions. They are both wired to take ten cameras, and have each been kitted out with eight Ikegami HDK 97 EXIII camera channels, complete with Canon HJ22ex7.6B IASE lenses and three additional Canon DIGISUPER XJ86x9.3B IE-II-D and two Canon HJ14ex4.3B IASE (wide angle) lenses.

Because of Indian transport regulations, which require the trucks to have Leyland chassis, and the tight delivery time of the project, Gearhouse Broadcast sent specialist coachbuilders from the UK out to Bangalore to construct the trucks on site. The equipment frames were built and pre-wired by Gearhouse Broadcast at its headquarters in Watford, UK, and then installed on site by its specialist Systems Integration engineers.

“We chose Gearhouse Broadcast because we were impressed with their systems integration expertise, and the proposal that they put forward to us for the Doordarshan trucks” said R. S. Oberoi, managing director at AGIV. “These two HD OB trucks will enable Doordarshan to deliver high quality broadcasts out of its major hubs in Kolkata and Chennai.”

“Flexibility was of upmost importance when it came to designing these trucks” said Eamonn Dowdall, business development director at Gearhouse Broadcast. “They’ll be used for anything from football matches and cricket games, to festivals and concerts, so need to be adaptable to a variety of situations. All the monitoring in the trucks is fed by the Pyxis router so they can be easily customised and there is increased flexibility on the tailboards for video and audio.”