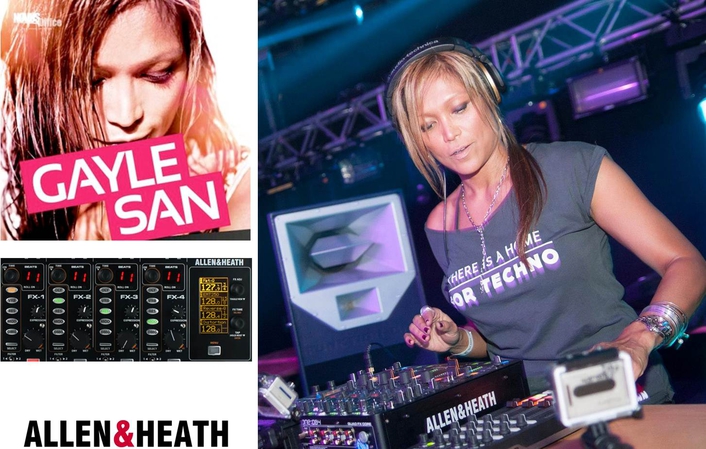 Renowned techno DJ and producer, Gayle San, has adopted the Xone:DB4 as her mixer of choice for touring and production work.

Gayle San started DJing 18 years ago with vinyl, then progressed to CDs, and most recently her set up is digital, originally based around the Xone: 4D and now the new Xone:DB4 mixer and Xone:K2 controller.

“I always choose A&H because every time I play on a Xone mixer at a club or a festival it never fails me. The sound is massive, open, and crystal – it’s amazing!” explains San. “Not only can I travel lighter with my new set up but there are endless new possibilities at each gig using digital technology, which is more motivating for an artist.”

San usually plays 3 or 4 tracks simultaneously on the DB4, alongside a K2 controller which is used to provide the tactile controls mapped to Traktor Pro.

“I love the EQ Isolator, it allows me to manipulate tracks how I want.  The DB4 FX are also astounding – I use delay, reverb, resonator, modulator and damage for distortion. I also love the filtering, it’s massive,” she says.