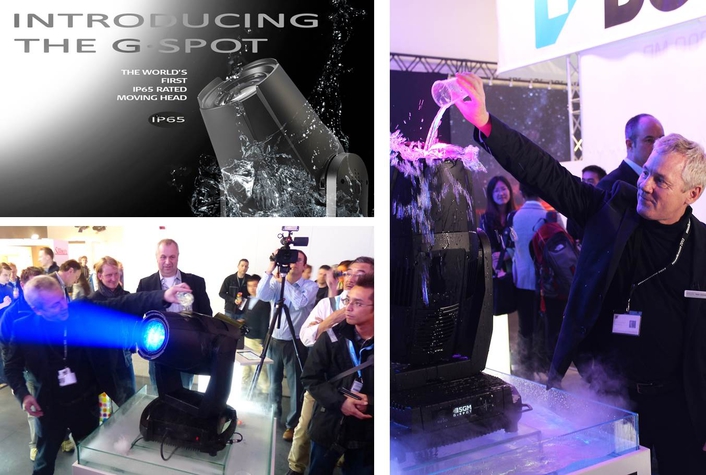 Peter Johansen subjects G-Spot to the water test
SGM used Frankfurt’s Prolight+Sound to demonstrate the extraordinary growth it has experienced since coming under Peter Johansen’s ownership just over a year ago.

The booth was permanently packed with visitors wanting to be among the first to witness the global launch of the groundbreaking new IP65-rated G-Spot, and make sure it lived up to its claim of superior optics and weather-resistant body. A constant stream of water splashing across the chassis left no-one in any doubt.

But equally important, SGM has built up a family of loyal and highly-motivated resellers during the intervening period and the company CEO was able to welcome partners from across the world to a pre-show dinner, awards presentation and distributor conference, so they were primed for action when the curtains were raised on the opening day.

G-Spot quickly became known as the moving head that turned heads, establishing SGM among the industry’s leading contenders for the first time — a company that will impact the future of advanced lighting technology.

Word about the IP65-rated sealed, multi-environmental unit, which happens to be the brightest in the market, had also spread throughout the press, and the interest was reflected in the attendance from all over the globe.

Once again, Peter Johansen, made sure everybody got what they came for — with a bold and tangible demonstration of the G-Spot’s IP65 rating.

By purchasing the SGM brand in 2012 and relocating the entire set-up from Italy to Denmark, Peter Johansen embarked on a tough, yet determined mission; to rebrand a run-of-the-mill lighting company into an industry heavyweight. His philosophy is simple. “There was really no point in copying what others have already done — that won’t put you in the lead. My focus is always on ways of making the impossible possible. This way you not only meet the needs of the market, you create new needs people didn’t even know they had in the first place!” 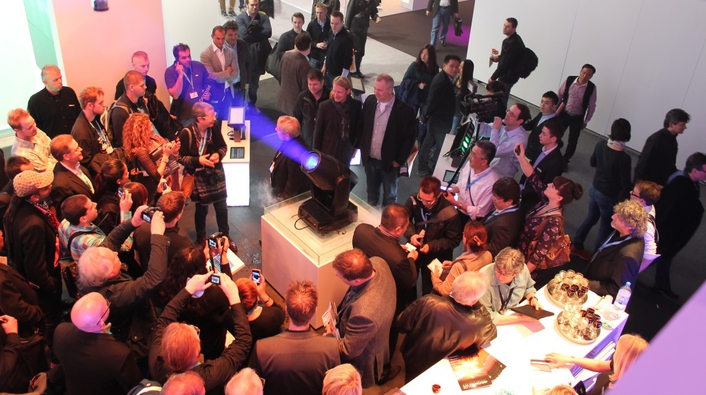 As he addressed the massed ranks of the press corps about recent contract wins for the company’s game-changing strobes — presently out in large quantities on tours by Pink, Taylor Swift and Beyoncé (and shortly with Rammstein) — he also announced that G-Spot was in the process of being specified.

But the overriding memory for visitors was that throughout the entire show SGM had the G-Spot placed in a huge fish tank at the SGM booth allowing visitors to do their own hands-on IP65 test by pouring water on the moving head.

On day four of the show the G-Spot was to withstand its ultimate test: German fountain specialists Oase Living Water allowed the company to test the G-Spot in the most extreme conditions: In the middle of a fountain sprinkling 2000 litres of water per minute! The stunt attracted a huge crowd who got to witness a world first experiment.

The G-Spot passed with flying colours. Now that’s what you call a grand finale!