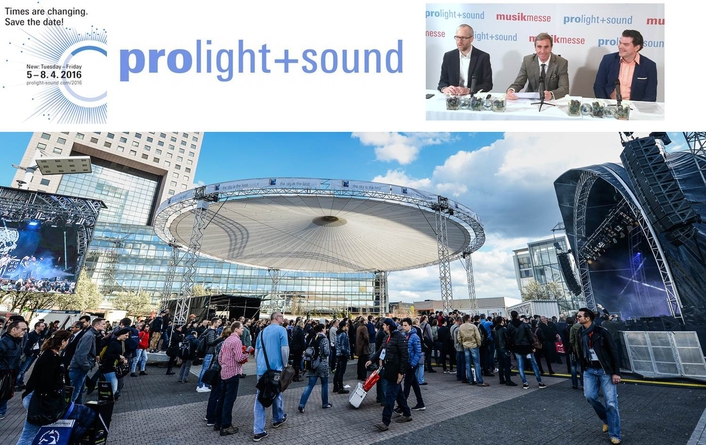 Frankfurt has been the capital of the music and event sector for the last six days: Musikmesse closed its doors today, Prolight + Sound ended on Friday. During this time, almost 110,000 visitors (2015: 108,409 ) from around 130 countries made their way to Frankfurt Fair and Exhibition Centre to place orders at the two international fairs, find out about the latest innovations and try new products. This year’s Musikmesse and Prolight + Sound were characterised by new concepts.

“Both events left no doubt that Frankfurt is where music happens. We are on the right track with the reorientation of our strong trade-fair duo. Against the background of changing sales and distribution structures in the wake of digitalisation, we will continue in this direction together with the sector and fine tune the fairs in cooperation with the associations and exhibitors”, said Detlef Braun, Member of the Board of Management of Messe Frankfurt. Additionally, more than 20,000 music fans attended the 50-plus concerts of the Musikmesse Festival, which was held for the first time at over 30 locations currently with Musikmesse. “We are delighted that the first Musikmesse Festival was able to inspire so many people. The concept of taking music to the city is a success”, reported Musikmesse Festival Director Wolfgang Weyand.

A total of 2,043 exhibitors  from 60 countries made presentations at the restructured fairs and the trade associations drew a positive conclusion with regard to the changes made to both events. “From the point of view of the VPLT, Prolight + Sound 2016 was a complete success. The new concept of Messe Frankfurt is spot on target and fully in line with developments in the sector: event technology continues to boom”, said Helge Leinemann, Deputy Chairman of the Professional Lighting & Sound Association of Germany (Verband für Licht-, Ton- und Veranstaltungstechnik - VPLT). After years of growth, the turnover of the event-technology sector is approaching the € 4 billion mark. According to the VPLT, the focus of the event industry remains on holding creative, professional, safe and innovative events. Daniel Knöll, General Manager of the Society Of Music Merchants (SOMM), explained: “More innovations, emotions, edutainment and networking concepts at Prolight + Sound and Musikmesse in Frankfurt – this was the result in many respects thanks to the new services and facilities. We demonstrated that Musikmesse and Prolight + Sound rank among the most important business-to-business platforms for German, European and international companies. Given the full exhibition halls on all days, we were also able to show that music-making continues to be a relevant subject in society.”

Leading exhibitors were also very pleased with the results. “We have been pleasantly surprised by the course of business and the mood at the fair. The number of retailers was good on the first two days and the flood of consumers up to the level expected with the fair now open on all days”, said Michael Stöver, Director Country Management, Yamaha Music Europe GmbH. Michael Kunz, Senior Product Manager, Kawai Europa GmbH, said, “For us, the new concept has been an outstanding success. Our aim was to reach both retailers and consumers. And we achieved this very well at Musikmesse where the level of internationality is much higher than at any other comparable event.” Key players of the event-technology sector were also delighted with the course of business: “We found the changes to be very purposeful. Prolight + Sound is the most important of all the fairs we take part in – it presents the complete spectrum and everyone who works in the sector attends”, said Marlon von der Kraan, Marketing, Philips Lighting B. V.

Music in all its variety: instruments and events in the halls, festive atmosphere on the outdoor exhibition area
From rock and pop, via classic and jazz, to electro and recording, visitors were able to immerse themselves in the complete spectrum of instruments and music equipment in the themed worlds of music at this year’s Musikmesse. Manufacturers attracted attention with extraordinary designs and new collections. “This was our first time at Musikmesse in many years. We regard the new concept as a good way to strengthen the fair as a marketing platform. Here, we showed our new product segment in the field of acoustic guitars and are satisfied with the contacts made with retailers during the fair, as well as with the interest shown by consumers”, said Hans Peter Wilfer, CEO of Warwick GmbH.
The on-going trend towards digitalisation could also be observed during the fair: the boundaries between the acoustic and electronic worlds are becoming blurred, e.g., high-grade e-pianos are imitating the sound of concert grands with increasing precision, the feeling of playing a digital drum set is now closer than ever to a real drum kit, electric string instruments offer the opportunity to practice using headphones. Music apps are now also more than just a gimmick and are even arousing the interest of music professionals.

With the many new events and information services, the fair was a magnet for both trade visitors and music aficionados. At the new Business Academy, retailers and distributors learnt how digitalisation processes can be used for their own business model. At the very popular Drum Camp, musicians and music lovers experienced performances by world-famous drummers, received tips for perfect sound enhancement in the Club Forum and increased their knowledge of keyboard instruments at the Piano Lounge. Outdoors, there was a festive atmosphere – the Musikmesse Street Food Session presented culinary reflections on musical themes while well-known artists provided the right sound on several stages. Numerous stars were to be seen and heard within the framework of the musical programme. They included electro-musician Schiller, Ärzte bassist Rodrigo González, pop-rocker Jupiter Jones, Bon Jovi’s guitarist Phil X, The Dead Daisies all-star band and singer-songwriter Konstantin Wecker who was presented with the ‘Pianist of the Year’ Award.

Showroom and information platform for the event sector
At Prolight + Sound, visitors could discover everything that makes an event a spectacular success, e.g., developments in the field of laser technology that not only make projections shaper and more brilliant but also extend the colour spectrum. Such equipment is becoming increasingly sophisticated and user friendly. Hence, in addition to show stages, they are also being used in museums, planetariums and rides in leisure parks. With mobile video screens, many manufacturers are getting into position for the major sporting events of 2016. LED technology is becoming increasingly flexible and is, for example, also fitted in innovative furnishing objects, such as multi-media lamps, bar tables with built-in screens and video dance floors. Another highlight at Prolight + Sound was camera drones offering aerial photos in full HD quality transmitted live on a screen. The key players of the audio and DJ sector also presented their innovations. “Launching our new flagship products at Prolight + Sound meant we attracted a great deal of attention. Our stand was very busy, especially in the afternoons, and the visitor standard very high. Prolight + Sound gets better from year to year”, said Tania Lee, Channel Marketing Manager of Pioneer DJ Europe Limited.

Over recent years, the impressive pace of development in the event-technology industry has led to a growing demand for highly trained employees. For this reason, Prolight + Sound has further expanded its range of professional-development facilities. An extensive seminar programme with over 70 lectures by top speakers communicated both basic and expert knowledge on technological trends, progressive event management and safety and security issues in the event industry. With the new ‘Future Talents Day’ on the Tuesday, Prolight + Sound offered for the first time a targeted programme for students and trainees in the event sector. Thus, newcomers had the chance to find out about career scenarios in the event industry, to take part in match-making events and attend special workshops and lectures. “The extensive conference programme at Prolight + Sound included interesting events for both beginners and ‘old hands’ and this alone would be a good reason for making the trip to Frankfurt”, said Joachim König, President of the European Association of Event Centers (Europäischer Verband der Veranstaltungs-Centren – EVVC). “Once again, Prolight + Sound demonstrated its unrivalled position as the leading trade fair for event technology.”

The next editions of Musikmesse and Prolight + Sound will be held at the beginning of April 2017.