Focus on Theater and Live 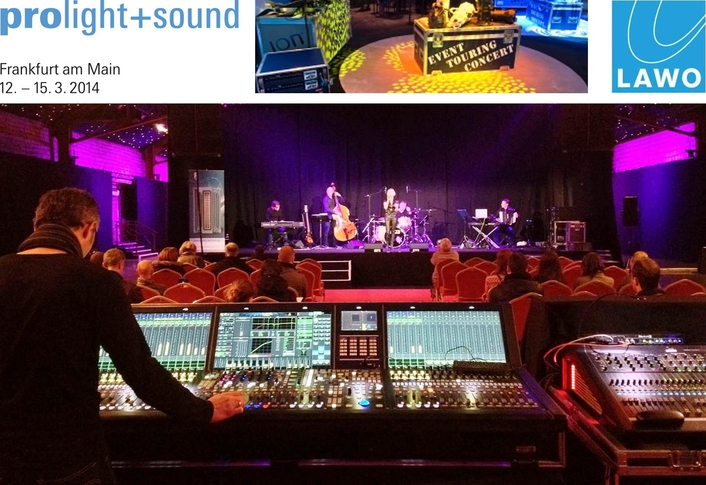 Lawo with audio and video equipment at prolight+sound 2014
At prolight+sound 2014 (Hall 8.0, Booth B50), Lawo will present solutions for live and theater applications. Audio mixing consoles of Lawo’s mc² series and the Innovason Eclipse desk will be on show. You are invited to experience the extraordinary sound quality and feature sets on offer. This year, the systems will be set up in two separate areas – in a live stage zone and a theater sector. Also being demonstrated, video streaming over IP can be used as a solution for orchestra conductor camera and backstage screens for ensemble and staff following theater scenes on stage.

Live mixing will be demonstrated on the Eclipse GT, and on the mc²56 with another, networked daughter mc²56, mirroring the settings of the master console. Also an mc²66 will be set up to demo theater applications.

In Frankfurt, Lawo will present the Innovason Eclipse GT live mixer, featuring new soundpad functionality that allows recorded sounds to be recalled at the push of a button and can be used to provide sound effects for scenes being performed on stage. Another unique feature is PANDORA* (*PAN Digitally Optimized for Real Acoustic). This innovative panning process makes it possible to create a natural listening experience even at the edges of large live music audience areas. Eclipse is also the world's first console to be able to control and memorize all the parameters used by the new generation of digital microphones.

With completely integrated digital workflow, a loss- and interference-free audio production signal chain has become a reality. The console also has a virtual soundcheck function that can be activated with the press of a button, disconnecting all live feeds from the stage and routing track playback to the desk’s input channels. These signals are not only available on the FOH console, but also on all systems linked to the network (eg. the monitor area), allowing Eclipse to recreate the conditions of the concert – perfect for fine-tuning a mix in peace and quiet.

The compact mc²56 and mc²66 consoles boast new features, integrating the mc² AutoMix feature, which automatically adjusts the levels of active and inactive microphones while keeping a constant ambient level. This is a unique function for panel discussions and live shows. AutoMix minimizes background noise and crosstalk, reducing coloration and eliminating truncated sentences and late fade-ins.

Preparation of the routing configuration and switching can be performed by the new mxGUI software with touchscreen operation, which can be also viewed and handled live on the Lawo booth.

Visitors are welcome to watch presentations, take part in demos and get hands-on experience. They are also invited to socialize and network during the daily Lawo Happy Hour, from 5pm to 6pm.

Lawo designs and manufactures pioneering audio and video technology for TV and radio broadcast production, post-production, as well as live performance and theatrical applications. Products include digital audio mixing consoles, routers, video processing tools as well as IP-based video and audio transport solutions. All products are developed and manufactured according to highest quality standards at the company’s headquarters in the Rhine valley town of Rastatt, Germany.