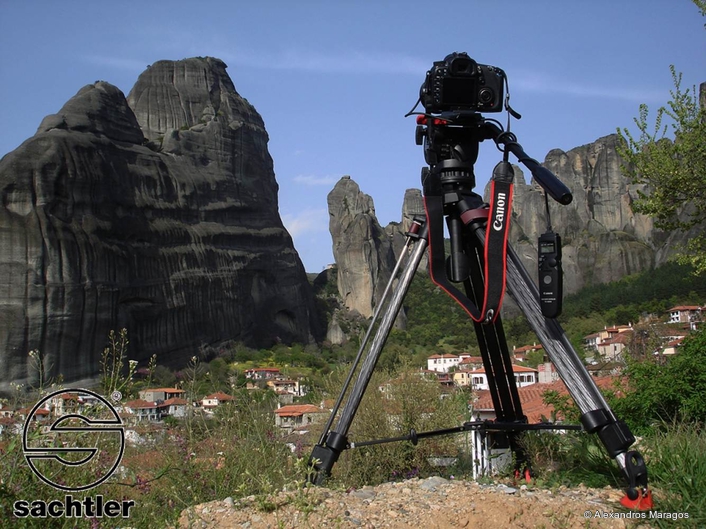 Time-lapse video "Suspended in the Air" about the Greek Metéora monasteries with Sachtler Cine DSLR fluid head and Speed Lock 75
Sometimes, when the air in Thessaly in Greece is especially misty, the monasteries of Metéora appear to be floating in the sky. The first of these 20 impressive buildings appeared on the high cliffs in the 11th century. Today, they are included in UNESCO's World Heritage sites. Greek video journalist and filmmaker Alexandros Maragos filmed this magical place for three days and nights.

The result: a four-minute portrait full of atmosphere in the form of a time-lapse video – "Suspended in the Air". For this project, Maragos worked with the Cine DSLR fluid head and the Speed Lock 75 CF tripod from Sachtler, a Vitec Group brand, for the first time. Since then, Sachtler equipment has been essential for him.

Crucial: panning precision
For Alexandros Maragos' Canon EOS 7D DSLR camera, the Cine DSLR is the ideal support. Featuring a payload range of 0.5 (1.1 lbs) to 5 kg (11 lbs), the fluid head was specifically developed for professional work with video-enabled DSLR cameras. The ten-step counterbalance made filming with various lenses easy for Maragos. In addition to other tools, his equipment includes the Canon EF 50mm f/1.4, the EF-S 17-55mm f/2.8, and the considerably heavier Canon 70-200mm f/2.8. With three vertical and three horizontal grades of drag (+0), the Cine DSLR enables precise panning and tilting. Maragos emphasizes: "With the Cine DSLR, especially fine adjustments can be successfully performed during every possible camera movement.”

Practical: the light weight of the system
The different film locations could only be reached on foot. "I climbed up numerous cliffs and ran up and down hundreds of stone steps. It was hot and I had to carry all of my equipment. In this situation, every gram counts," says Maragos. The Cine DSLR and the Speed Lock 75 CF weigh 2 kg (4.4 lbs) each – ideal conditions for Maragos's shoot on the cliffs of Metéora. Despite the light weight, Sachtler equipment is extremely stable and robust.

Impressive: the atmosphere of the film location
"The weather conditions were not ideal for my project. During the 72-hour shoot, the sky was nearly cloudless. For this reason, I had to do without one of the most important stylistic elements for a time-lapse video. So, I concentrated on the starlit night sky and filmed continuously from midnight to eight o'clock in the morning to illustrate the earth's rotation," says Maragos. "It was probably my most exhausting project to date, but the challenge motivated me, and I am more than satisfied with the result. The atmosphere of this special place deeply impressed me."