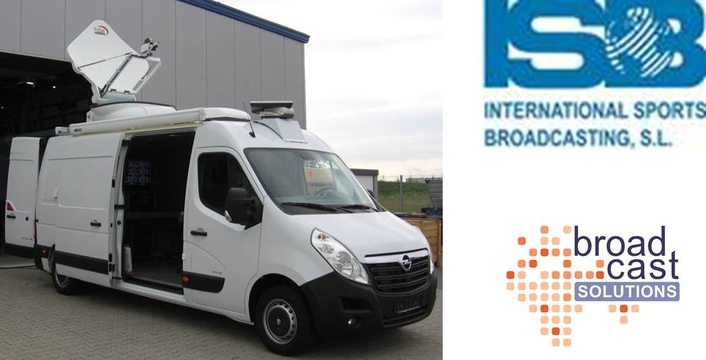 All the equipment can be assembled outside of the car in less than an hour resulting in a complete production control environment. Additionally a fully redundant ProSat Solutions DA120 antenna system is installed with all necessary equipment to perform as a HD-SNG uplink. An 8kVA underfloor generator is installed in the support vehicle, to supply the power for the production. The support vehicle offers enough space for equipment and to transport seven people, a prewired workplace gives flexibility for editing or bigger productions.

The entire audio-visual equipment is installed in two flight cases, which are docked into the vehicle

About International Sports Broadcasting
International Sports Broadcasting (ISB) is a full-service broadcasting organization that has a long elong experience. Headquartered in Madrid, Spain and with offices in the United States, ISB was formed more than 10 years ago. Founded by Manolo Romero, a pioneer in sports television, ISB primarily serves major events as the host broadcaster, responsible for providing the television and radio signals as a service to the event's right holding broadcasters.

Created in 1996 after successfully winning a competitive bid to become the host broadcaster for the 2002 Salt Lake City Olympic Winter Games, ISB has been actively involved in every Olympic Games since 1998 while members of its staff have worked in each Games since 1968.

Members of the ISB team have been instrumental in the televised production of hundreds of the greatest events in sports during the past 30 years, including the Olympics, the World Cup, Super Bowl, World Series and athletics, swimming and skiing World Championships.

The team members within ISB match the name of the company: International. ISB is represented by personnel from more than 10 different countries, having worked on every continent and in many countries. With this experience, the ISB team has been exposed to a variety of working environments throughout the world and understands the methods and mentalities of the different broadcasters and local customers.