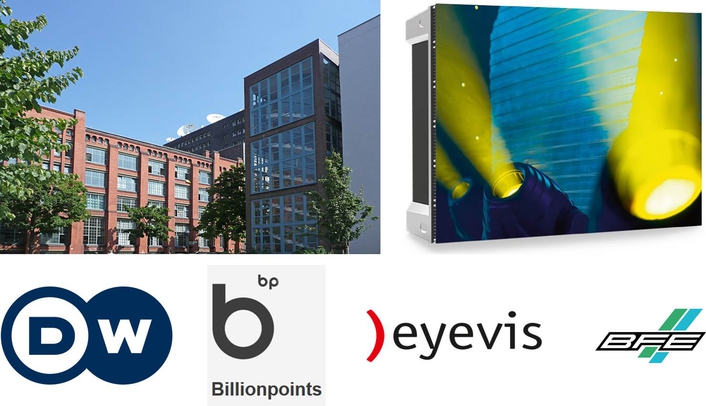 BFE and eyevis install LED video wall with a pixel pitch of only 2.0 mm in Studio 3 of Deutsche Welle
Brilliant background images for live newscasts of Deutsche Welle: Under the direction of the system integrator BFE Studio und Medien Systeme GmbH, a curved video wall by eyevis, assembled of 144 high-resolution LED-modules, with a pixel pitch of only 2.0 mm is currently being installed in Studio 3 of the German foreign TV network in Berlin. On the 24 m² video wall, images, graphics, and videos to support the new English channel of Deutsche Welle will be displayed through three full HD signals. The studio in Berlin will be put into operation in mid June – just in time for the globally available information channel on 22 June 2015. The premiere will be embedded into a festive ceremony: in front of over 2.000 guests who will be meeting at the Global Media Forum, the international media congress of Deutsche Welle (22 – 24 June 2015).

Thereby, the high-resolution LED-modules by eyevis convince through their high brightness and the simple adaptability to the lighting conditions in the studio. In this way, the LED-modules, thanks to the integrated image processing electronics, can be adjusted to the, for the studio required, 3200 Kelvin color temperature with one click. The globally unique front-support of the LED-modules thereby facilitates the service of the video wall. It makes front-side access of the modules and the single electronic components possible. Since no rear-service-area is necessary, LED-modules can be installed only inches from the studio wall. To integrate the video wall into the innovative studio design of set-designers Billion Points Film/TV und Event Ausstattungs GmbH, BFE and eyevis developed a special base-frame, which gives the viewers in front of the TV screens the impression that the LED-wall floats freely in the studio.

In the framework of the project, BFE Studio und Medien Systeme GmbH rebuild the existing Studio 3 including control room and complement it. The project includes, in addition to the LED video wall by eyevis, 6 cameras of type GVG LDX including new filters, which were specifically designed for the use with LED-walls. The LED-wall is fed by a Live graphic system by Orad. Through Orad’s Canvas-Technology, a completely frameless feed of the LED-wall over 3 HD panels is possible.

To control the basic features of the LED-wall, a Crestron media control system including touch-control-panels is used. Moreover, rendering systems by Vizrt allow for the embedment of social media elements into live graphics. They can also be used to create augmented reality graphics in Studio 3. In connection with the actually existing LED-wall in the studio, virtual graphics or live-feeds can be placed freely in the room without blue-screen-backgrounds being necessary. The data required to level spatial perspectives in relation to the camera image is provided by Camerobot robot stands. Since a future automation of the direction is being planned, the components to be delivered have to be includable.

About eyevis
eyevis, German manufacturer of large scale video systems, is one of the leading providers and integrators of visualization systems for professional applications in control rooms, virtual reality, and simulation as well as in the areas of broadcast and AV. eyevis has a worldwide network of subsidiaries and certified retailers. As one of only a few providers, eyevis is capable of offering entire systems from one source. The complete solutions of eyevis include display solutions, graphic controllers, software applications as well as all necessary accessories.

About BFE Studio und Medien Systeme GmbH
BFE Studio und Medien Systeme GmbH is a brand-independent system integrator with more than 40 years of experience in planning and implementation of complex projects in the sector of broadcast and media technology. As a competent and reliable partner, BFE supports customers in Europe, Asia, North Africa and the Middle East during the implementation of customized solutions for their specific requirements. While producing their own KSC product line, BFE places innovative branch solutions for the professional television and radio industry on the market. The BFE subsidiary in Dubai Studio City supports activities in the GCC region.