Ki Pro facilitates live event production and tapeless recording on the road for acts including Dave Matthews Band and more
Filament Productions provides touring video and production design services for top-drawing acts. For the last three years, AJA Ki Pro digital video recorders have played an integral role for the company's tapeless recording and live production workflow. Filament is using them once again for the Dave Matthews Band (DMB) 2012 summer tour, which kicked off May 18th in Houston, Texas.

Filament’s video director Mike Lane captures the concert in HD Apple ProRes 422 for the camera feeds that project on both house screens and custom LED video walls. Dave Matthews Band shows are shot with five high definition cameras fed into six Ki Pros. Each camera is isolated and a copy of the director’s cut is kept for post-production reference. DMB typically plays a two and a half hour set, accruing up to two terabytes per show.

The cost savings of moving to a tapeless workflow were significant. Each of these shows are archived on external drives and catalogued back at DMB’s studio in Charlottesville, VA. After the content is captured it is then considered for future uses that include web videos, social media and potential live show releases.

Filament VP Ryan Gall said, “The Ki Pros give us instant access to the show’s footage. We have the ability to review and edit videos on the spot. With Ki Pro, it’s just as easy to capture, store, and archive that same footage without adding significantly to your gear footprint or budget.” 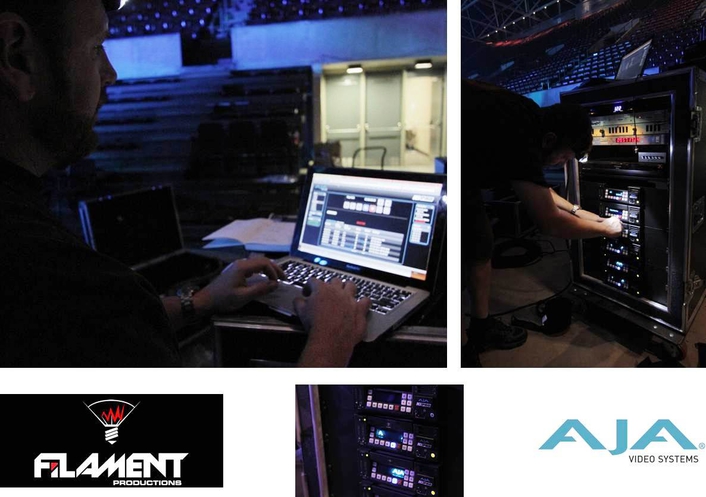 Bryan Bieber, GM at Filament, said his team has used their Ki Pros for three years, averaging about sixty shows a year. “We don’t have time for gear failure on the road. The AJA Ki Pro has been very consistent for us,” said Bieber.

“Filament Productions has been using our products in really inventive ways, and we’re glad that their Ki Pros have stood the test of time and life on the road,” said Nick Rashby, president, AJA Video Systems. “It’s customers like Filament who inspired us to release our Ki Pro Rack, a 1RU rack mount version of Ki Pro, to continue making tapeless production that much easier.”