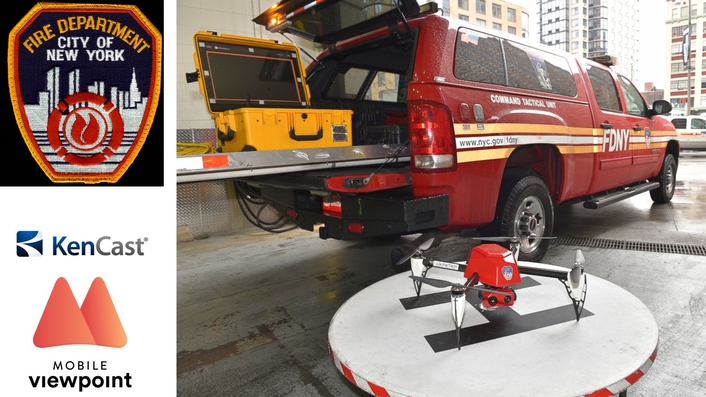 The Fire Department of New York (FDNY) – the United States’ largest fire department – recently deployed a live broadcasting platform to aid in situational awareness for fighting fires. The platform was custom-built by Mobile Viewpoint and its US partner company, KenCast.

The platform transmits video via the Mobile Viewpoint Streamur iPhone app to the KenCast end-user platform by using three iPhones – each paired with a cellular hotspot – to broadcast password-protected live feeds to users on any PC, Android or iOS device.

Senior chiefs back at the operations center and other offsite agencies can now watch the incident unfold (in real-time – 5 seconds of delay) and cooperatively make the strategic decisions necessary to support the firefighting operation.  Once the fire is under control and broadcasting has stopped, the FDNY can review the cloud-recorded video for training, analysis and investigation.

The FDNY is currently expanding its existing Mobile Viewpoint/KenCast platform to include a tethered drone.  As the first FAA-approved government drone for use in New York City, FDNY’s drone will provide live aerial video of the department’s firefighting efforts transmitted to KenCast’s end-user platform using the Mobile Viewpoint Streamur 7 backpack transmitter.

About Mobile Viewpoint
Mobile Viewpoint is a global player, focusing on the development and implementation of IP transmission solutions for both the broadcast and security industries. Their H.264 and now H.265 HEVC codec implementations, combined with patented technology, allow for HD video to be transmitted over bonded IP connections. Customers include major broadcasters, such as BBC, Al-Arabiya, Sky Sports News, NBC Sports.