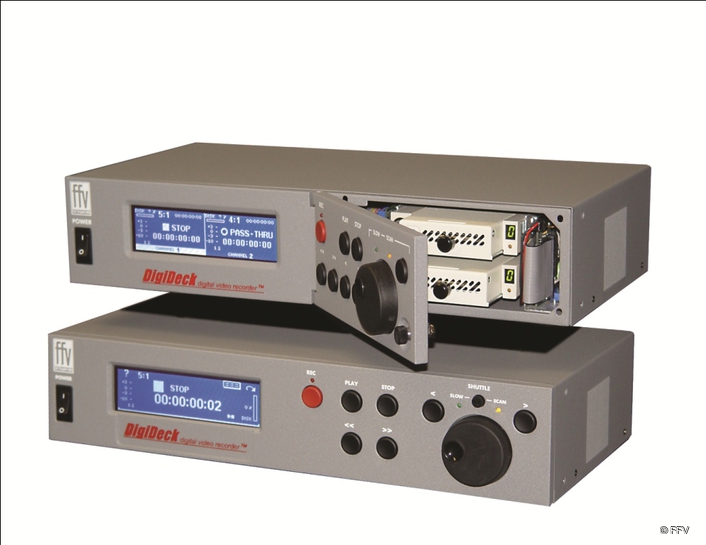 As the flagship product of GlobalStreams™, a leading manufacturer of video communications and production equipment, the GlobeCaster incorporates a production switcher, character generator, and digital video effects (DVE) into a single device. The DigiDeck DVR extends the GlobeCaster's recording and playout capabilities by enabling producers to add up to four streams of externally edited content to live productions. The DigiDeck's RS422 control and continuous time code capabilities enable instant clip recall and cueing from the GlobeCaster system.

"Now, our GlobeCaster users can connect up to four DigiDecks with content that has been previously recorded and professionally edited, and then cue and play the clips simultaneously — just as if the content were internal to the GlobeCaster. The DigiDeck is extremely intuitive and easy to use, as it's operated with the traditional tape deck controls familiar to everyone," said Mike Benke, senior engineer for GlobalStreams. "GlobalStreams is always on the lookout for systems that are cost-effective and will extend our products with practical, universal functionality. FFV's bulletproof technology is a perfect fit for us."

The DigiDeck-GlobeCaster combination for a motion picture production filming

The DigiDeck-GlobeCaster combination was recently called into service for a motion picture production filming on location in New York. The crew was filming a scene that replicated a television news show complete with different camera shots. All of this footage was recorded and edited ahead of time and loaded into a series of DigiDeck DVRs, which were controlled by the GlobeCaster to simulate the cueing of camera shots on multiple reporters in the same manner as a live news program.

"Because all of the timelines had been built in advance, the director was able to cue the different camera shots instantly with a few mouse clicks," said Benke. "This provided a sense of realism and spontaneity that would not have been possible using videotape. There would have been a lot of time wasted with tapes being reloaded and rewound, and there would have been significant delays when the footage was cued."