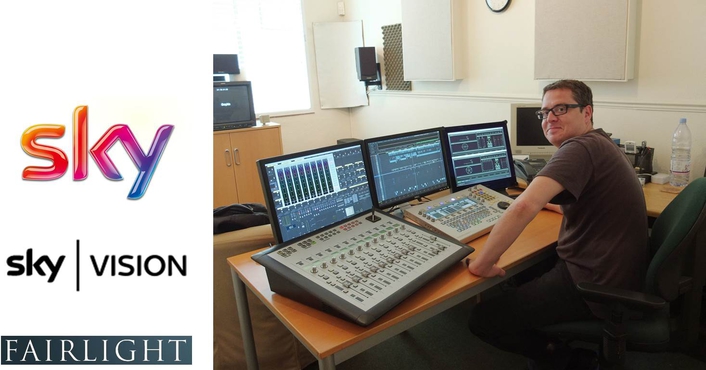 Upgrading to a Fairlight EVO console has ensured that Sky Vision's London-based Sound Studios are now compatible with BSkyB UK
London-based Sky Vision Sound Studios, part of the BSkyB/Sky Vision family, has recently completed a major upgrade of its Fairlight equipment to bring it in line with BSkyB's UK broadcasting facilities in Osterley. The three-studio complex, two mix rooms and a prep room, has upgraded its Fairlight Constellation console with a Fairlight EVO, six of which are already in use at BSkyB. It has also upgraded its XYNERGI system by installing the latest software version – a move that is already improving workflow.

Sky Vision's Audio Supervisor and Senior Dubbing Mixer Robert Thompson says: "Although we have handled work for external clients such as SKY, the BBC, Universal and Channel 5, the majority of our work comes from Sky Vision. As work often moves between BskyB's sound studios and ours, it made sense for us to have identical equipment. The dubbing mixers at BSkyB were obviously very happy with their Fairlight EVO's and this, combined with our own good experiences of Fairlight, meant we had no qualms about upgrading our own desk."

Tucked away in a Georgian Mews in the heart of London's Fitzrovia, Sky Vision Sound Studios handles a variety of programming covering wildlife, docudrama, documentary, children's TV shows, scripted content, sports and comedy. The diversity of the projects Sky Vision Sound Studios tackles is mind-boggling, as is the speed of turnaround this facility achieves.

"Last year we completed over 70 hours of broadcast TV, which for two mix rooms is pretty good going," Thompson says. "That's just shy of three hours a month - a lot of work by anyone's standards. Of course none of this would be possible without the Fairlight systems we have in both rooms. It really is a credit to Fairlight we achieve what we do because you simply couldn’t get through such a large quantity of work without having a system that is so reliable and flexible."

Sky Vision Sound Studio's affiliation with Fairlight goes back to 1999 when the facility was first set up by dubbing mixer Trevor Barber. Thompson, who was brought in some years later to help increase the facility's output, says: "I got switched on to Fairlight by Trevor because he wouldn't use anything else. I didn't start out as a Fairlight user - in previous jobs, and as a freelancer, I had mostly used Avid Pro Tools. But when Trevor first set up the studios he installed a Fairlight MFX hard disk recorder in Studio One. As soon as Fairlight introduced their new Xynergi range, Trevor came on board straight away. In fact, the Xynergi system we own and use today is serial number 5. It still works perfectly. The only thing we have changed is the operating software, which we have just upgraded again to the latest version."

Thompson adds that transitioning from Constellation to EVO has been very straightforward, mainly because all Fairlight systems are very intuitive.

"We have had no issues moving over to the EVO," he says. "Both Russell Skellon, who mainly works in Studio Two, and myself have been using Fairlight for a long time and we have so much experience that the system is almost second nature to us. I would say the same about XYNERGI and the upgrade to the latest software version. Setting up the XCS controller on the EVO so that it works the way we are used to was very quick to master and it was all so seamless that we were up and running almost immediately. The only thing that is taking a bit of time is exploring the new software features. We are now finding out all the new tricks it can do and it is already offering much greater functionality." 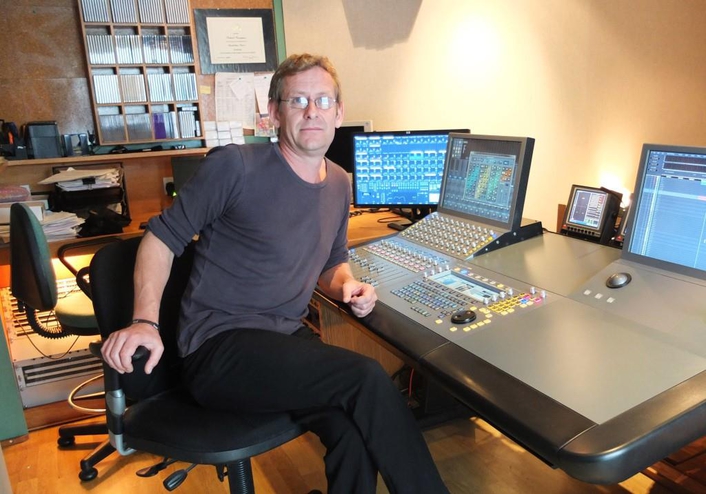 As many users will testify, one of the main benefits of Fairlight is the ability to build customised workflows.

"We often have to deliver shows to multiple broadcasters worldwide, and with Fairlight I am able to build consoles and workflows that produce all the deliverables I need very efficiently," Thompson says. "I also find editing on Fairlight incredibly intuitive because I can use the Picture Keys on the XCS to make my own controller and editor, which I design around my personal preference. It's also really nice to personalise my common functions and assign them a macro so they can be done with just the push of a button. It gets me away from mouse based editing. The whole XCS mentality is quite exciting as it has the potential to operate as a controller across multiple applications."

Thompson adds that Fairlight's ability to accept and export multiple file formats is useful when the facility gets projects from outside clients, "but to be honest we've honed the workflow between ourselves and Sky Vision to a point where this isn't really relevant," he says.

"What is useful, though, is Fairlight's ability to give users two picture tracks at the same time. If you are re-versioning and don't get an EDL file that tells you what has been cut where, this can be a very tedious and time consuming process. With Fairlight's integrated video we can streamline the process by running two picture tracks and comparing them in real time. This makes it much faster to manually make the cuts. It's a great feature and one that really helps us.

"For example, the nature of our work is that we do quite a few versions of a specific programme mix. With the new software, we can easily conform all of our edits, including the mix, which was something we couldn’t do with previous versions. We've always had a good dialogue with Fairlight and this is something we've been specifically asking them to do, so having it now is just fantastic because it means we can work even faster as the whole reversioning process is now far more automated. Most other systems rely on third party software for this."

"I'm still checking this out but it looks like another really useful feature," he says. "You can record while you are scrolling and jog shuttling. It basically records anything passing through a specified output as a background task. I can also see this being useful for ADR because it saves the timeline becoming littered with takes."

Having proved that Sky Vision Sound Studios can handle an annual output of more than 70 hours of broadcast TV on Fairlight's previous software, Thompson is confident this can be exceeded now that the new version is in place. But despite all the time saving features the new EVO console delivers, he still feels the best thing about Fairlight is its sound quality.

"I suppose I'm a bit of a musician at heart," he laughs, "which is why I really like the smoothness of the Fairlight I/O. Some of our clients are composers and musicians as well so it's no surprise they also comment on how good this system sounds."