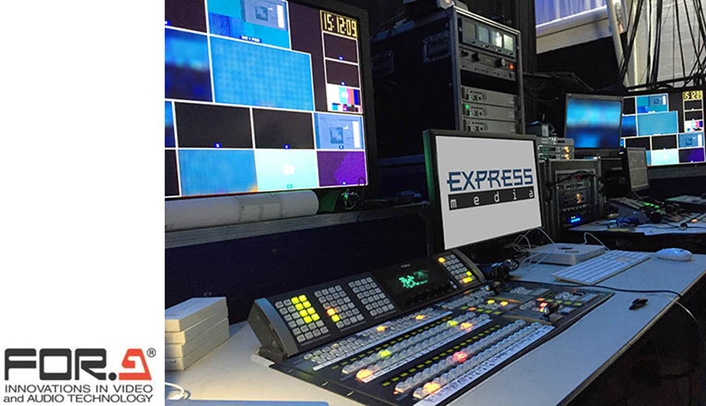 .
When San Francisco-based equipment rental and video production company Express Media was recently in the market for a new video switcher to help service its smaller shows, the company knew exactly where to turn. Having been successful with FOR-A switchers for the past several years, Express Media opted to purchase the HVS-100 portable video switcher.

“The HVS-100 was one of the few switchers that we saw at last year’s NAB Show that allows SD, HD, 3G and 4K operation all from one compact unit,” said Steve Barger, President of Express Media. “FOR-A’s software and firmware are very stable, and we never have to worry about running into problems. We also appreciate the switcher’s ability to produce effects on each of the AUX outputs. It’s very useful in instances when we’re cutting one show to air and maybe another to a LED wall or projection screen, as the HVS-100 allows each output to do dissolves and other effects - even when cutting from the AUX bus itself.”

A FOR-A video switcher user for the past eight years, the FOR-A unit that Express Media first purchased is still going strong today. A few years later, the company added to its FOR-A inventory to service shows that didn’t need a full two M/E video switcher by buying an HVS-300HS unit.

The three FOR-A switchers form the core of the company’s customized flypacks, which are used for major live webcast and broadcast productions. They’ve been built specifically for heavy-duty use at corporate, entertainment and sporting events.

“We’ve had an excellent track record with FOR-A switchers,” Barger explained. “We’re pleased with the flawless performances of our video switchers. Our FOR-A equipment has never failed us, and the company’s service and tech support is phenomenal.”