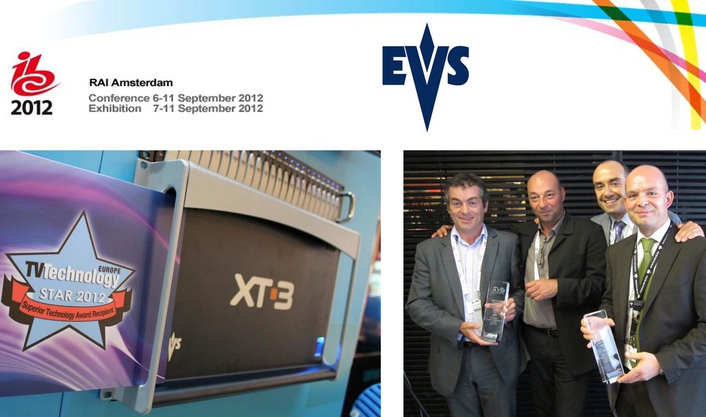 EVS has capped off a highly successful IBC by winning two prestigious industry awards: A Star 2012 Award and a SVG 2012 Award
The leading designer of broadcast and production systems won a STAR 2012 Award for superior technology from TV Technology Europe Magazine. It was also recognised by Sports Video Group for an Outstanding Technical Achievement in Sport Broadcast award, presented to UEFA for its innovative use of EVS’ C-Cast second-screen media delivery platform for UEFA’s coverage of the Euro 2012 Football Championships.

The Sports Video Group award presented to UEFA noted the pioneering role that EVS’ C-Cast second screen media delivery platform played in delivering second-screen media content to viewers throughout the Euro 2012 Football Championships. C-Cast was also successfully deployed for one of this summer’s major sporting events, and kicked off the new season of the French football league, Ligue1.

“It’s fantastic to receive these prestigious awards from such credible, well-respected and independent sources,” said Joop Jansen, CEO of EVS. "It is nice reward for our ongoing and pioneering research and development efforts, and for the forward-thinking nature of our customers as they look to engage with viewers and prosper in a rapidly-changing media landscape. It’s made for a very satisfying end to a great IBC.”