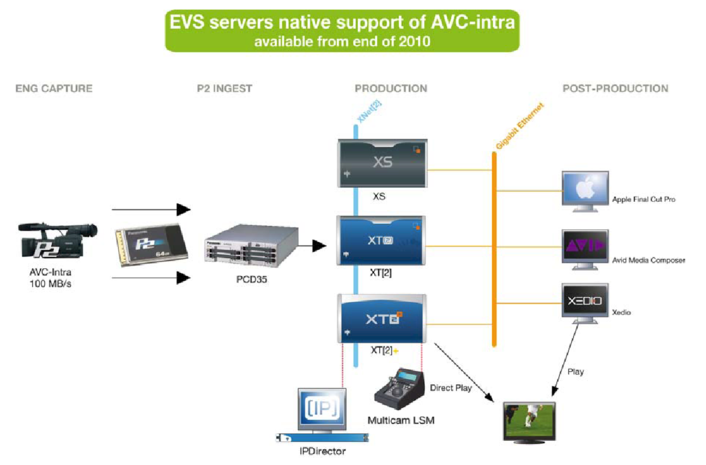 All incoming video feeds (cameras, satellite, ENG, VTR) will automatically be encoded with EVS servers in AVC-Intra format in real-time

AVC-Intra is a video coding developed by Panasonic. It is fully compliant with both the H264/MPEG-4 AVC standard and SMPTE specifications. AVC-Intra recording on P2 cards has become a standard feature in Panasonic broadcast equipment, including P2 camcorders, and field recorders.

EVS’ native support of AVC-Intra means, all incoming video feeds (cameras, satellite, ENG, VTR) will automatically be encoded with EVS servers in AVC-Intra format in real-time, allowing immediate availability of media files for live editing, replay and playback actions, as well as the possibility to transfer files to NLEs supporting AVC-Intra without transcoding.

"The native support of AVC-Intra is a logical process for EVS, as we continually strive to understand and anticipate the codec requirements of broadcasters and producers working in HD”, said Pierre L’Hoest, Chief Executive Officer of EVS. “This is why our systems are optimized to offer the highest level of flexibility and reliability in this ever changing production environment ”.

Mr. Tadao Shimozuru, Director of Professional AV Systems B.U. / Panasonic Corporation, agreed: "Our vision of P2 is part of a seamless flow of media files throughout any production path. EVS is a pioneer in file based production and we have been partners in realizing this vision for several years. It is safe to say that this latest integration, adding AVC-Intra quality to an already efficient system will be met with plenty of enthusiasm in the broadcast production world."

The new codec will be officially supported by EVS’ XT[2]+ and XS video production servers in Q4 this year; it will be available through a software update. AVC-Intra support expands the wide range of codecs already supported by EVS servers.

EVS will be presenting its latest solutions at its booth C9508.