Jackshoot: First in the UK to fit its location filming and editing van with an ultra compact uplink system designed by Dawson
The mobile facilities company Jackshoot is the first to deliver TV rushes over the KA-SAT satellite of Eutelsat Communications in order to bring the programme ‘Live and Lost with Blackberry’ to the UK’s Channel 4 television station and YouTube.

Channel 4’s programme ‘Live And Lost with Blackberry’ lets viewers decide which route a band takes to a show, resulting in a journey that frequently takes in rural locations. Three of the biggest music acts (Chipmunk, Rizzle Kicks and Parade), equipped with a BlackBerry and £20, were left in a remote location with five days to make their way across the UK. The show is shot on location a few days before transmission and episodes are posted daily onto YouTube.

“In the past we have had people on location, travelling around the country editing the show in the location truck which is expensive and time-consuming,” explained Jackshoot production director Simon Haywood. “Now, with the ability to send rushes and proxy files over satellite, clients have flexibility and feedback opportunities that were just not possible before. In the future, I also expect the film industry to take advantage of this technology. There is a great opportunity for location film crews to transmit rushes back for directors to review immediately, enabling instant feedback and saving time on revisiting locations for reshoots.” 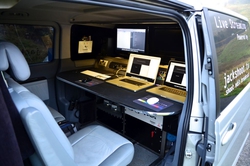 Jackshoot is the first in the UK to fit its location filming and editing van with an ultra compact vehicle system designed specifically for Eutelsat’s KA-SAT by Dawson, the mobile broadcast specialists Dawson. The new Dawson GC-Zero 70 product uses a low profile 240mm antenna and enables the vehicle to connect and transmit at 10Mpbs.

Ian Dawson, Managing Director of Dawson, commented: “We wanted to create a product for the media industry that could take advantage of and match the innovation of Eutelsat’s KA-SAT satellite. This first antenna, as part of a new range of Ka antennas, is already causing waves in the industry.”

Cristiano Benzi, Head of Video Value Added Services at Eutelsat, said: “This innovative newsgathering application, developed and provided by our Skylogic affiliate, prefigures a number of broadcast services that our new KA-SAT platform will be able to deliver. Video contribution is entering a new era and we look forward to expanding our commercial response to serve the needs of channels, production houses and news agencies within the KA-SAT service area of Europe and the Mediterranean Basin.“

Operational since May this year, Eutelsat’s KA-SAT satellite ushered in a new generation of multi-spotbeam satellites. Its innovative concept is based on a payload with 82 narrow spotbeams connected to 10 ground stations. This configuration enables frequencies to be reused 20 times and takes total throughput beyond 70Gbps, significantly lowering the cost per bit for applications that include broadband and data services, such as film file delivery.