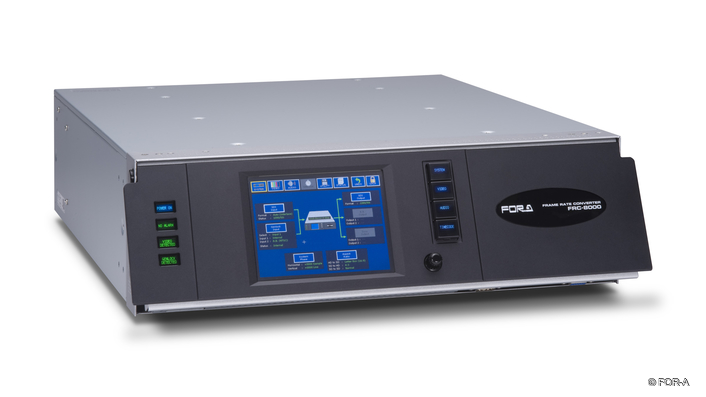 FRC-8000 Frame Rate Converter
FOR-A, a leading manufacturer of video and audio systems for the broadcast and video production industry, today announced ESPN has purchased five FRC-8000 HD/SD Frame Rate Converters for its new transmission facility at its headquarters in Bristol, Conn. An additional two FRC-8000 units will be going to the ESPN facility in Brazil next month. FOR-A will showcase the latest technology of the FRC-8000 at the 2010 NAB Show in Las Vegas, Nev., April 12-15 (Booth C5219).

The FRC-8000s will be used for ESPN’s broadcast of the upcoming world soccer event in South Africa this summer. ESPN chose the new FRC-8000 units based on its success with its two FOR-A FRC-7000 HD Frame Rate Converters.

“We are proud that ESPN will rely on the new FRC-8000 as part of its new transmission facility,” said Mr. Hiro Tanoue, President and CEO, FOR-A Corporation of America. “ESPN will be using the FRC-8000’s remote Web control, which will maximize some unique functionality in our frame rate converter.”

The FRC-8000 features simultaneous HD and SD output, along with an optional front touch panel for easy operation. Equipped with FOR-A’s proven motion compensation processing technology, the multi-format frame rate converter with support for a wide range of signals, including 1080i, 720p, NTSC, and PAL. Up, down, and cross converters provide both frame rate and format conversion in a single unit. The FRC-8000 also features scene cut, 2:3 pull down, and text field detection for optimal conversion. Plus, it supports multi-channel audio conversion, with optional two-channel Dolby E encode/decode support.

FOR-A Corporation of America is a major manufacturer and distributor of video and audio systems to the broadcast, postproduction, and professional video markets.