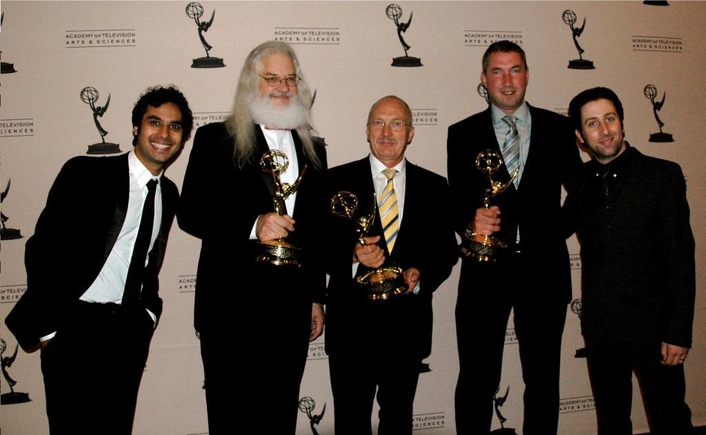 Kunal Nayyar (BBT), B. Morgan Martin (GMA), Dr. Klaus-Peter Scholz and Stephan Salzbrenner (Stagetec), Simon Helbe (BBT)
On 14 August 2010, SALZBRENNER STAGETEC MEDIAGROUP was awarded with the only 2010 Emmy® Engineering Award for their NEXUS Digital Audio Routing system. The official announcement on www.emmys.com states that the NEXUS is “the finest, most versatile audio routing system available today.” In particular, the committee of the 62nd Emmy® Awards emphasized the quality of the patented True-Match™ converter. True-Match™ ensures realistic signal conversion from the analog to the digital domain.

The prestigious Emmy® Award is presented to an individual, company or organization for developments in engineering that are either so extensive an improvement on existing methods or so innovative in nature that they materially affect the transmission, recording or reception of television. “We are really proud and consider this award a special reward for our efforts not only in the TV broadcast market in the U.S., but also worldwide,” says Dr. Klaus-Peter Scholz, managing director of STAGETEC in Berlin. “First, we are really thankful to our prominent group of developers around Dr. Helmut Jahne and Uwe Winkler. Secondly, B. Morgan Martin of our partner GMA has been instrumental in making the NEXUS such a success in the US. Our greatest thanks, however, go to our customers. For many years, they have been a key driver of innovation with their manifold requirements and have successfully managed a large number of challenges using our products and expertise. They, too, have their considerable share in this significant award!”

The NEXUS was introduced in 1994. Since then, STAGETEC has continuously improved the digital audio-routing system, enhancing it with new groundbreaking interface modules. Today, several hundred installations worldwide including more than 4,500 NEXUS Base Devices are proof of the exceptional quality, robustness and versatility of the system.NEXUS is not the only product by the SALZBRENNER STAGETEC MEDIAGROUP that has received an internationally renowned award: In 1997, the CANTUS system, which was the first digital audio-mixing console released by the MEDIAGROUP, received the IF Award for outstanding product design. In 2006, the MEDIAGROUP celebrated an even more important design honor when the IF Award in Gold was presented to the AURUS digital mixing-console system.

The Emmy® Award is the most significant TV award in the USA. It has been presented annually since 1949 and today includes 91 categories.

SALZBRENNER STAGETEC MEDIAGROUP is a German consortium of three companies who compliment each other by combining their creativity and experience to produce professional products and services with outstanding reliability for the broadcast, live production and theatre markets. Headquartered just outside of Bamberg Germany, the company was started 45 years ago by Friedrich Salzbrenner. Today, hundreds of installations can be found throughout the world in broadcast facilities, O.B. trucks, theaters, government buildings and multipurpose halls.