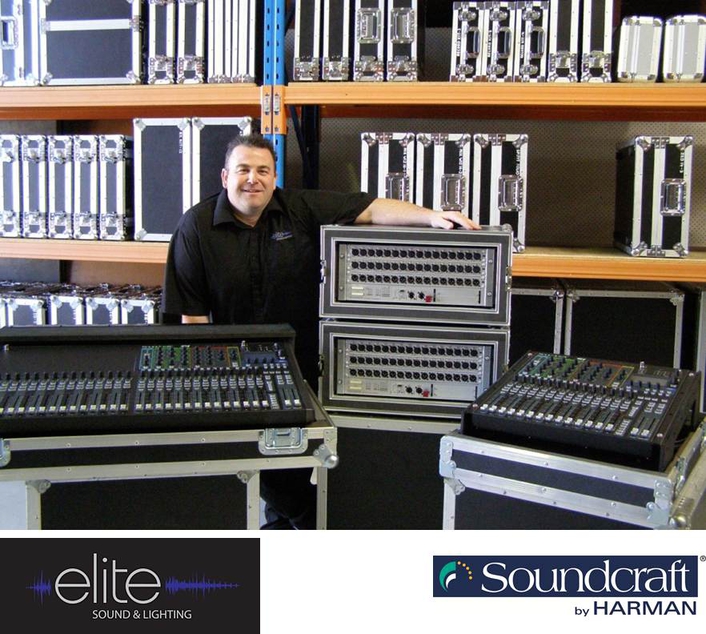 Darren Russell, managing director of Elite Sound and Lighting
Elite Sound and Lighting of Canberra and the Australian capital’s premier audiovisual production and installation supplier, has a wide variety of clients from dry-hire to rock’n’roll to corporate and conferencing. Consequently whenever the company purchases new equipment, the key element is versatility.

“We always spend a lot of time researching products, which is exactly what we did when we recently decided to invest in some compact digital audio consoles,” commented Darren Russell, Elite’s managing director. “We looked at what all the manufacturers in the market had to offer but in terms of versatility and features, we felt that HARMAN’s Soundcraft consoles had the edge over the competition.”

For Russell, one of the main selling points with the Soundcraft consoles is their ability to either take analogue inputs and outputs on the back of the console or use a CAT5 digital multicore system, or a combination of the two.

“That was a large part of the equation for us,” Russell said. “Plus we’ve had some larger, older Soundcraft consoles in our hire department for many years and they’ve always sounded great and their reliability is always good. The fact that the digital consoles have that HARMAN pedigree in them is assuring; the effects are Lexicon and the processing is BSS or dbx models. It’s all industry standard gear that sounds great.”

“For what they are and at the price point they are at, the Soundcraft Si Compact consoles sound amazing,” Russell stated. “Versatility and features for their price were the main reason for their purchase. Soundcraft added a heap of new functionality in their most recent software upgrade, which was great. We had ordered them based on a demo of the previous version so we were delighted to have all these new features.”

“We have found that digital audio consoles come from either one of two places,” he said. “They are either designed by a propeller-head, computer-programming boffin who has never mixed a band or show in their life or, as is evident with the Soundcraft consoles, they come from someone who actually has done live sound. It’s nice to get a live sound console out of the box to find it’s immediately evident that it has been designed by a sound guy!”

This was proven when Soundcraft’s Australian distributor Jands sent Elite a Soundcraft Si Compact to demo and Darren and his crew had it up and running passing audio without even opening the manual.

“To be honest, since getting our Soundcraft Compact Si consoles we’ve probably only had to look at the manual twice to find out how to do some complex routing,” added Russell. “Anyone who has mixed live sound before could get one of these consoles out of its box in its factory state and do a gig on it. That’s how intuitive and user-friendly it is. We have operators with a vast level of experience and they can all use the Compact Si consoles straightaway. In fact I reckon my two and a half year old daughter could almost use one!”