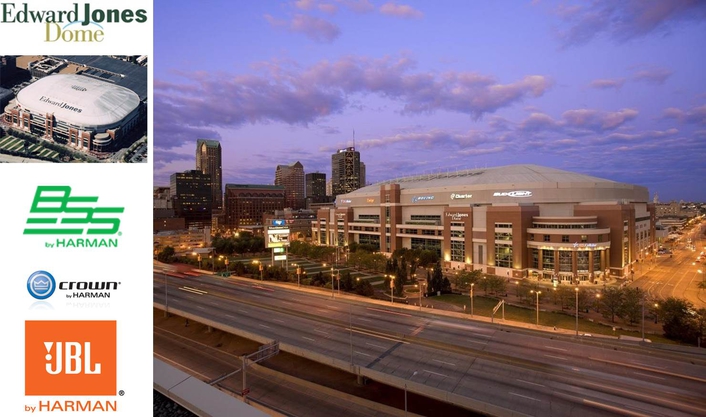 .
Opened in 1995, the Edward Jones Dome in St. Louis is no stranger to bringing new attractions to town. Owned by the St. Louis Regional Sports Authority and operated by the St. Louis Convention & Visitors Commission, the facility is part of the city’s convention center complex and seats up to 68,000 people. Its new HARMAN Professional audio system, featuring BSS Audio, Crown and JBL VERTEC® loudspeakers, is part of the continuous program to improve the experience of attendees at a variety of sporting events, as well as large conventions, religious gatherings, and much more.

The Edward Jones Dome project is the largest installation of powered VERTEC equipment in the world. At the heart of it are 12 arrays that each contain 12 JBL VERTEC VT4889A fullsize line array elements with DrivePack® DPDA input modules. In addition, there are two arrays of nine and two arrays of 12 JBL VERTEC VT4887A compact line array loudspeakers with DPDA modules that cover the field. All arrays utilize a top and bottom short frame and are suspended by a custom Polar Focus rigging system that allows every array to be operable for service. The installation also features four BSS Audio BLU-800 devices, two of which are used in the control room to create new networks. Of the remaining two, one feeds all bowl loudspeakers and the other all of the under deck and back of the house fill speakers.

“For this project we worked very closely with HARMAN to identify an audio solution that would address all of the goals the owners had to improve audio performance throughout the facility in an efficient, cost-effective manner,” said Paul Murdick, who heads the technology solutions division of TSI Global, a St. Louis-area full-service systems integrator. “With this installation we wanted to take advantage of the acoustical upgrades, which we were confident would make the audio sound better than it did before. Also, with the Sports Authority’s plans to diversify the kinds of events it hosts, it was the perfect time to upgrade the entire system rather than do a quick fix.” 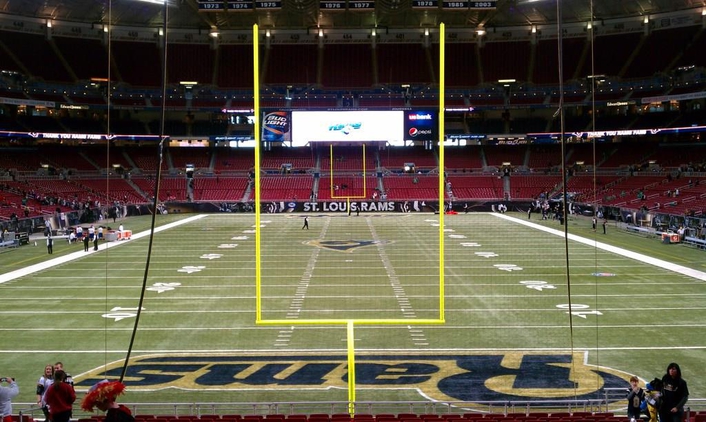 Lee Buckalew, systems designer for TSI Global, explained that he found the fact that the amplifiers were network-enabled to be particularly beneficial. “It was our first time using them, and we found them to be amazingly stable,” he said. “Their networking and error-reporting capabilities are impressive.”

Together, the team worked to address challenges unique to the Edward Jones Dome, including the shape of the dome, which made solid, even coverage for both lower and upper seats a potential problem.

In order to expedite tuning of the massive PA the team utilized JBL HiQnet Performance Manager™ and the system is now remotely configured and managed on a day-to-day basis using HARMAN HiQnet Audio Architect™. “We were able to minimize our time from start to finish on this project using both HARMAN software platforms,” added Buckalew.

“From start to finish, HARMAN was overwhelmingly supportive,” says Murdick. “As a project that began more than two years ago when the owners spoke to us about fixing a center cluster of loudspeakers and getting more field coverage with the audio system, HARMAN really demonstrated its commitment to working with systems integrators over the course of a relatively long-term installation.”