Ed Sheeran Gets the A Team with Sennheiser and Avalon

.
British singer songwriter Ed Sheeran is steadily conquering the world; travelling from continent to continent, his appeal seems unwaveringly universal. The speed of his acceptance is matched by the pace of his current tour, which has taken in Australia, the United States and is currently in the UK before heading off to cover the rest of Europe without a pause. With him every step of the way is a Sennheiser 2000 Series wireless microphone system.

Ed’s Front of House engineer is Chris Marsh from Major Tom, the tour’s audio provider. “I first got involved with Ed last October when he was doing a club sized tour,” explains Chris. “I had met him previously at the Latitude Festival when I was there with Rumer. He was opening the festival that day and we got talking about the level of work that I was doing and where he wanted to be. Shortly after that, I got a call from his manager saying they were going to do bigger shows and would I like to be involved. Ed’s such a lovely guy and I enjoy his music, so I said yes, I’d love to and we’ve been on the road ever since.”

Chris’s microphone choice for Ed is a Sennheiser 2000 Series wireless system with an 865 capsule.

“It didn’t start off like that,” Chris recalls. “When I first came on board, he was using a 945 capsule on a 500 Series wireless system. But instantly I found a problem…

“Ed sings and plays guitar, so the microphone spends a lot of time on the stand. When he’s doing that it’s fine, but once he’s built a loop there are many songs where he will grab the mic and run around the stage, rapping, or singing, or enticing the audience, and he has the habit of cupping the microphone and holding it in the air at an awkward angle. With almost every microphone you can use, that changes the response dramatically and you find yourself reaching for the EQ constantly to change the tone, or to stop it feeding back into the monitors.

“The other option is that you find a capsule that works for both cupping and open, which is what I did. Mark Saunders at Sennheiser UK was really helpful by allowing us to try lots of different mic systems with Ed. The 865 is the capsule out of all those that I tried, and not just Sennheiser, that has consistency between the open mic and the cupped. And Ed likes it!”

As well as finding the perfect microphone, Chris has found the tour to be an interesting voyage of discovery in other ways. 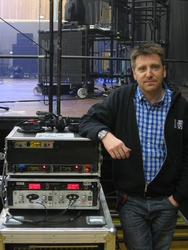 “You would think that a singer songwriter with an acoustic guitar isn’t really that difficult to engineer,” he continues. “But back in the early days of me wanting to become an engineer, I was taught that actually, the hardest gig in the world is the acoustic guitar and vocal show, because there is nowhere to hide. You can hear everything and you can’t turn the drums or the keyboard up to hide it.

“This is very much the case with Ed, particularly with his looping. We found that we were getting a lot of distortion in the signal path. After a considerable amount of experimenting, it turned out to be the DI boxes that were causing the problem. We went through several different boxes from different manufactures and both active and passive, and had similar, although slightly different, problems with each one. Then we got to the Avalon U5…”

Chris found that Avalon, a brand recently added to Sennheiser UK’s portfolio of distributed products, had the headroom he needed in a box that he considered to be tonally better than anything else he had tried.

“I wouldn’t use any other DI box now,” he smiles. “In fact, we carry our two Avalons with us everywhere, just in case there isn’t one for us to use when we arrive at a venue.”

“Having worked with Chris and Major Tom before, and Sennheiser having always focused on the up and coming artists, it’s been a great project working on Ed’s live set up and touring requirements,” says Mark Saunders of Sennheiser. “We always try to ensure that product is available for evaluation, as sometime it’s not always the newest or the highest spec product that fits what can be a very specific set of parameters, which Ed’s set up was a great example of.”