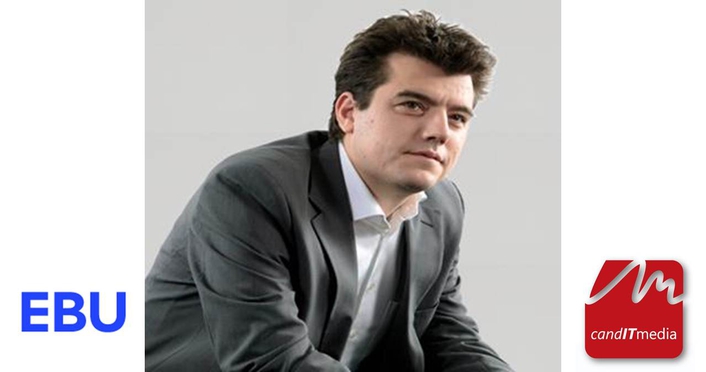 EBU Director General Ingrid Deltenre applauded Mr Vermaele's contribution to the EBU Membership and the media industry
Lieven Vermaele is to step down as Director of Technology & Innovation at the European Broadcasting Union (EBU) after six distinguished years of service.

Mr Vermaele will leave his post in summer 2013 and return to his hometown Ghent, in Belgium, to be CEO of CandIT-Media, a fast growing technology start-up that was by origin a spin-off of the University of Ghent, IBBT/I minds and Flemish Public Service Broadcaster VRT.

"Moving on from this unique job carries an element of regret," said Mr Vermaele. "I could continue in this role, which would continue to bring great fulfillment for many years. However it's my personal belief that there is immense value in recruiting new minds with fresh ideas."

Mr Vermaele continued, "I am extremely proud of the people and talent within my department and across the EBU. I firmly believe in the organization and public service media, and am proud of the success and recognition that we have achieved over the years."

"This next phase of my career offers an opportunity to provide a solution to one of the key issues facing many organizations: high throughput and large file transport, combined with the mission critical services aspect and requirements like guaranteed performance, QoS, efficiency, scalability and reliability.”

EBU Director General Ingrid Deltenre applauded Mr Vermaele's contribution to the EBU Membership and the media industry as a whole.

"With European broadcasters facing a challenging period of technological transition, Lieven has ensured that EBU Members have had access to optimal technical frameworks. Under his direction EBU Technology & Innovation has sharpened its focus on increasing Member cost effectiveness and enhancing the media consumer’s experience."

Ms Deltenre said that Mr Vermaele had set a high benchmark, but that she was confident the process of replacing him could be achieved smoothly.

She added: "We expect a strong field of candidates to come forward for the position, which will be advertised immediately. A replacement will be announced within the next few months."

In addition to his primary role, Mr Vermaele chairs DigiTAG, a cross-industry organization that encourages and facilitates the implementation of digital terrestrial television services and the promotion of spectrum needs for these services.

He also chairs the ETSI/EBU/CENELEC Joint Technical Committee, which is responsible for setting European standards for media and broadcasting systems (WorldDMB, DVB, HbbTV). Mr Vermaele is also on the council of the IBC, the Europe’s largest media industry event.

EBU TECHNOLOGY & INNOVATION
EBU Technology & Innovation is world renowned for its groundbreaking work on broadcasting technologies and standards. Much of broadcasting’s history has been written through the work of the EBU.

Among its multiple achievements, the EBU has shaped global standards for digital television, HDTV and UHDTV.  We drove the DVB and DAB digital broadcasting standards, and the EBU has helped make Hybrid Television what it is it is today.

EBU Technology & Innovation brings together some of the media industry’s foremost thought leaders, who come to us to apply their knowledge for a greater good. Their expertise is keenly sought by journalists and by the highest-profile broadcasting forums, such as IBC and NAB.