Lively acoustics and perfect reverberation in the Grand Ballroom of Dresden’s Summer Palace
At the beginning of August 2014, the La Folia Baroque Orchestra made recordings on several days in the historic setting of the Palais in Dresden‘s Great Garden. Experienced recording professionals used carefully selected audio technology components to capture all of the sound nuances at the highest quality level. Microphones from audio specialist Sennheiser played a decisive role as the first links in the recording chain.

“For these recordings, we are using the best equipment available on the planet!” said Günter Pauler who, as mastermind of Stockfisch Records, was primarily responsible for the technical aspects of the recording, leaving the musical management to his colleagues Jakob Händel and Hans-Jörg Maucksch. The audio experts were in the happy situation of being able to draw on excellent resources when it came to miking. “For four or five years now, I have been using a lot of Sennheiser products,” explained Jakob Händel, who is internationally successful as a recording producer and is well known in particular for orchestral productions with elaborate miking. “I always have optimum support from this manufacturer and am happy to provide feedback on my everyday experience.”

The label boss Günter Pauler‘s clear favourites include the Sennheiser MKH 800 with its five switchable pick-up patterns and multi-stage switchable sound adjustment. The experienced audio professional recently discovered the merits of the figure-of-eight MKH 30 radio frequency condenser microphone. “The MKH 30 is one of the outstanding microphones in the Sennheiser product range,” said Pauler. “It is a really unique figure-of-eight that you have to know how to handle – and if you do, you can effectively fade out other instruments by using this microphone. The clean sound and the musicality of the MKH 30 are exemplary. There is nothing comparable on the market!“

Miking
During the recordings in Dresden, there were three levels of main microphones, which were supplemented by numerous spot mikes. Which signals in which combination will ultimately be found on the released version was not finally decided during the recording session in early August 2014. The moment of truth will not come until mixing takes place in the studio. A one-point system was located quite close to the orchestra. An A-B stereo bar with two Sennheiser omnidirectional MKH 8020 placed 1.2m apart was set up a short distance away. Two omnidirectional mikes on a bar with a width of 4m acted as a third main microphone system. 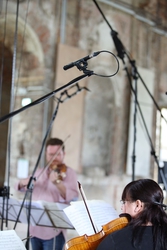 A key role among the spot microphones was played by Sennheiser’s MKH 30 pressure gradient microphone, which, according to Günter Pauler, turned out to be “exactly the right solution” for this particular situation. The acoustically transparent design of the capsule enables the diaphragm to have direct and virtually inertia-free contact with the sound field. There are no acoustic delay elements or resonators that could impair the sound. Due to the symmetrical capsule design (the diaphragm is arranged between two identical backplates), the sound is picked up with the same intensity on both sides, thus resulting in a perfect figure-of-eight pick-up pattern. Thanks to its distinct suppression of sound signals coming from the side, the MKH 30 ensures very good acoustic separation of individual instruments when used as a spot mike, thus allowing interfering room modes that run perpendicular to the main axis of the microphone to be effectively cancelled out.

In addition to the MKH 30, Sennheiser MKH 800 microphones could also be seen at various positions in Dresden. MKH 50 microphones (super-cardioid) were also in use. “For me, the MKH 50 is one of the best-sounding microphones that can also be used to isolate at the same time,” explained Jakob Händel. “It’s true that an omnidirectional microphone basically always sounds best, but as soon as you are working in an environment with several sound sources, the MKH 50 and also the MKH 8050 are my absolute favourites. I am probably the only user to own sixteen MKH 8050. There are simply no other microphones with a super-cardioid pick-up pattern that sound as elegant outside the axis as these models.”

The positioning of the spot microphones was chosen to suit the sound characteristics of the particular instruments. Some violins sound a little harsher when heard from the front, whereas the sound is softer from behind, which meant that experienced ears were required. “We listened very carefully and tried to find the perfect balance for each instrument,” said Jakob Händel. Many instruments were double miked with two capsules pointing from different directions towards the individual sound sources. 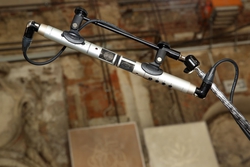 At positions at which the MKH 30, according to Jakob Händel, produced “too much pressure”, an MKH 800 with a roll-off in the bass range was used instead. For the harpsichord in particular, this had the effect of successfully reducing structure-borne noise. Two MKH 800 turned at 90 degrees to each other were positioned above the strings in an X-Y arrangement. After initial tests with a cardioid pick-up pattern, the final decision was made in favour of wide cardioids in order to pick up the volume of the instruments even better.

The solo violinist was miked with two MKH 800 positioned at 90 degrees to one another (figure-of-eight). One microphone was pointed directly at the instrument while the other may possibly be used in the mixing process as a signal supplier for an M-S matrix. According to Jakob Händel, the double figure-of-eight provided pleasant “bite”.

The long-necked theorbo was miked with an MKH 800 (figure-of-eight), in which a roll-off was activated in the low-frequency range. In parallel to this, the treble was raised. “The equalisers in these microphones are sensationally good!” said Jakob Händel with great satisfaction.

The sound of the double bass was recorded using an MKH 30, accompanied by an MKH 80 (super-cardioid). An MKH 800 was used for the baroque guitar. The cello had an MKH 30, and two MKH 50 were additionally placed close to the instrument. Which signals will ultimately be used will be decided during the mixing process.

Location
A special role was played by the recording location. The Grand Ballroom located on the first floor of the Dresden Summer Palace has lively acoustics and enables musicians to hear each other perfectly. Reverberation in the ballroom is in a range between 3 and 4 seconds. High frequencies in particular sound very elegant in the hall, and the reverberation seems to “stick” to the instruments. The recordings seem homogeneous and by no means as if a room effect has been subsequently added to a “dry” ensemble. 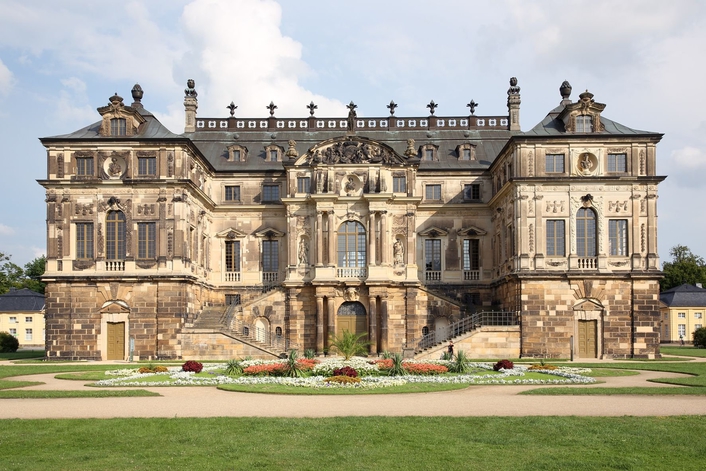 “The reverberation period in the ballroom is exactly right and, not only that, the reverberation sounds exceptionally good, which means that for this production we don’t need to add any artificial reverb later,” explained Günter Pauler. Jakob Händel added: “The rough wall surfaces certainly help to prevent the reverberation from fluttering and creating unpleasant effects. The original stone floor of the hall has been replaced by a sprung wooden floor, which also has a positive influence on the sound. It only means that a little more attention needs to be paid to structure-borne noise than is usually the case.”

During the recording sessions, there was an extraordinarily positive mood among the musicians and a productive recording atmosphere that was characterised by exceptional pleasure in performing. Clearly delighted, Jakob Händel spoke of “one magic moment after another” as he listened to the performance in a side room that had been converted into a temporary control room, from where he communicated his pleasure to the musicians via a Sennheiser ME 36. For monitoring, the team chose a pair of Neumann KH 310 A, and Händel and Pauler both agreed that they provided excellent sound considering their compact dimensions. Various headphones were also used, including an HD 800, two HD 650 and a MOMENTUM On-Ear Ivory.

Familiar and Unfamiliar
On the agenda for the recording session in the Palais of the Great Garden was “The Four Seasons” by Antonio Vivaldi. There was also a violin concerto (“The Grand Moghul”) and the first performance of a largely unknown work by Giuseppe Antonio Brescianello. La Folia was represented by eight musicians at the recording session. The instruments were a harpsichord, a theorbo, a lute, a violin (with gut frets), a baroque cello (without an endpin), a double bass, three violins and a baroque guitar. 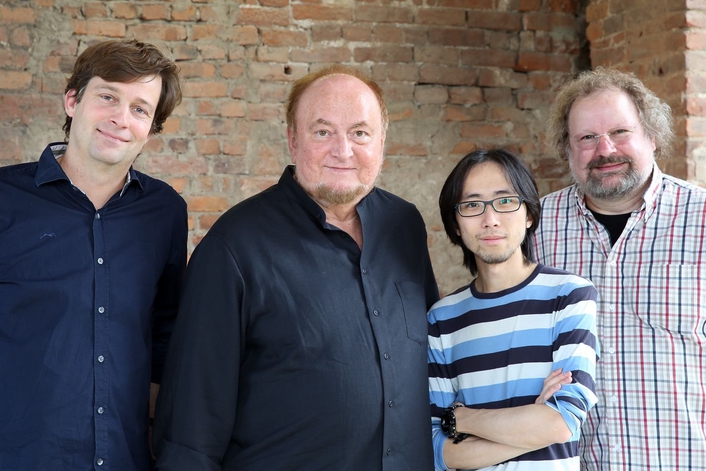 The recordings that were made with the La Folia Baroque Orchestra in Dresden’s Palais (Summer Palace) in August 2014 will be released on Stockfisch Records in autumn this year. They will be available in various formats, both as physical audio media and as a download.