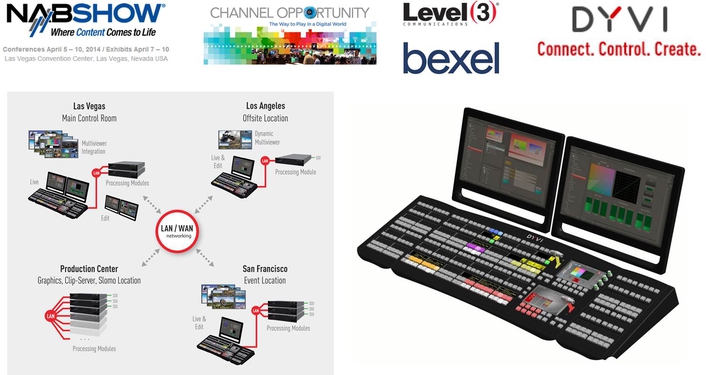 Workflow demonstrated at the DYVI booth at NAB 2014 Show will showcase full remote production capabilities between L.V. and L.A.
Dyvi Live is announcing its collaboration with global network operator Level 3 Communications to feature a combined IT production workflow with full remote operations at the Dyvi Live booth (SU13707) at the NAB 2014 show.

An integrated DYVI production system at the NAB Show in Las Vegas will be connected to an offsite studio located in Los Angeles -- equipped with a similar DYVI production toolset -- to demonstrate how the two locations can review and control media in real-time. Connectivity will be provided via a 10 Gbps connection from Level 3.

The DYVI system at AEG studio in L.A. will be controlled by the NAB demo station in Las Vegas. Bexel, a broadcast services provider, is installing three cameras at AEG studio – one showing the real-time emulation of the panel to commands being sent from Las Vegas, another demonstrating changes at the multiviewer, while a third is delivering live footage from the California coast for editing either remotely at AEG or at the NAB Show.

“We are excited about the collaboration with Level 3, AEG and Bexel to help us demonstrate the remote production power of DYVI at the NAB Show,” said Philippe Van Walle, General Manager at Dyvi Live. “The integration with Level 3 is raising the DYVI offering to a new level, and enabling us to offer an optimized cloud-based production solution to our clients.”

“Remote production is a major area of focus within our Level 3 Video Cloud solution set,” said Mark Taylor, vice president of Media and IP Services at Level 3.“With new IT-based technologies from companies like DYVI, Level 3 is harnessing the global scale and reach of its network to support more flexible and efficient broadcast production workflows.”

The full universe of IT-based production will be demonstrated at the DYVI booth, including the creative options at the panel, true 3D operations, and unlimited amounts of layers and workflows that are meeting today’s requirements. Questions regarding potential links to the Level 3 network and technical requirements will be answered at the DYVI booth by a Level 3 representative. Developers of the new system, operators and sales personnel from DYVI will be on site to answer all other questions.

Anyone who is interested in the future of broadcast should plan a visit to the DYVI booth (SU13707).