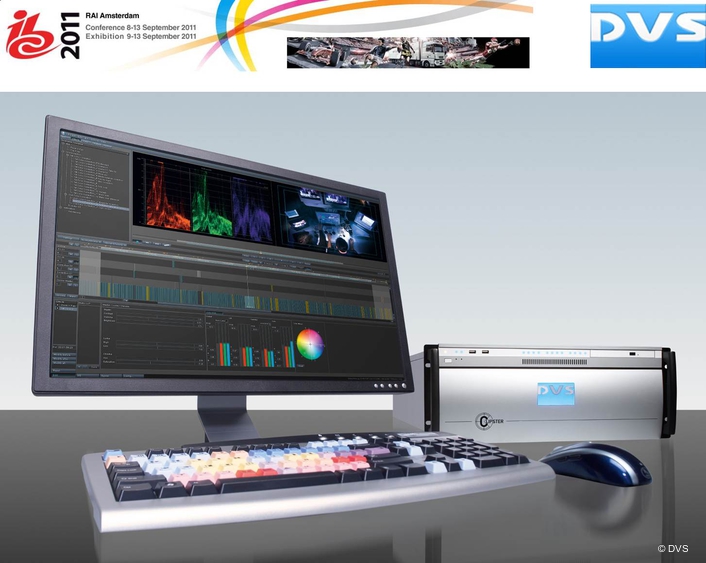 CLIPSTER® with extended JPEG2000 support at IBC
At this year's IBC, DVS will once again be showcasing the openness and flexibility of its systems that are tailored to broadcast and post production customers' needs. CLIPSTER® offers Mezzanine Format Mastering for IMF with extended JPEG2000 support. Plus, the VENICE video server will impress users with its ability to record and play out JPEG2000 and AVC-Intra Class 200 in real time, among other features – all in a 2U chassis.

From September 9 - 13, DVS will be showcasing its latest products at IBC, booth 7.E25. At the same time, it will be focusing on the openness of its systems which offers broadcast and post production customers decisive advantages.

VENICE, the multi-channel video server for the broadcast market, also comes with countless new features for IBC. In addition to high-quality codecs such as JPEG2000 and AVC-Intra Class 200, VENICE also supports the Avid systems ISIS® and Interplay, effortlessly handling stereo 3D material. Similarly, the size of the DVS video server has changed: VENICE is now also available in a slimline 2U chassis offering space for up to 9 TB of internal storage.

The SpycerBox is ready to make an impressive impact at IBC with its incredible performance. Available in two versions – SpycerBox Flex and SpycerBox Ultra – DVS SpycerBoxes integrate into any storage environment. SpycerBox Flex offers real-time support of five uncompressed 2K video streams in parallel. With a storage capacity of 43.2 TB, the compact "SAN in a box" offers all the functionality of a professional storage system which is also easy to administer thanks to a Single Point of Management.

New SDK features, a mixer as well as DirectShow support are among the many new features which DVS has equipped its Atomix video board family with for IBC. The renowned Atomix series meets all the requirements that high-end film, HDTV post production, broadcast applications and demanding presentations call for. After its debut at NAB 2011, the Atomix HDMI video board perfectly complements the range of functions of DVS's product line.

Hans-Ulrich Weidenbruch, DVS CEO: "We are really looking forward to presenting a variety of new product features on our IBC booth to users and visitors alike; these new features will contribute towards optimizing users' workflows for the long term. With Rohde & Schwarz at our side, we can expand our innovative and technological potential further still."