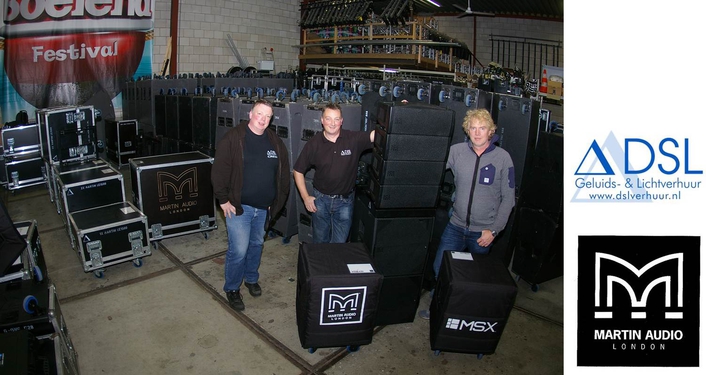 Ad Gomes, Gert-Jan Gomes and Rudolf Nagtzaam — with MLA Mini in the DSL warehouse
Dutch sound and lighting rental company, DSL Geluids- & Lichtverhuur has extended a long tradition of running premium Martin Audio PA systems in its fleet by becoming the first operation in the country to invest in the manufacturer’s new MLA Mini.

This is the latest, scaled down version of Martin Audio’s award-winning Multi-cellular Loudspeaker Array technology, and is in line with the small footprint required for a large proportion of their work.

Set up by brothers Ad and Gert-Jan Gomes in 1983 (originally as Disco’83 Sound & Light) by early in the new millennium they were ready to upgrade from their own ‘home-brew’ PA stacks to branded products. “And we recognised a lot of riders were mentioning Martin Audio.”

Starting with Blackline they moved onto W8C/CS Wavefront Compact subs, WSX subs, and then W8LC Compact line arrays and WS218X subs. “We like the sound quality and rider friendliness of Martin Audio, and especially the three-way tops,“ says Gert-Jan.

If their earlier purchase of the W8LC line array had put them firmly on the map MLA technology has raised the bar even higher. And when Dutch distributors TM Audio arranged a demo of the new MLA Mini in Utrecht they were eager to attend “to make sure it lived up to its hype. They recall, “We got to play with it by ourselves; the sound of the speakers was amazing and the software is intuitive.

“We had looked at other conventional Mini line arrays but when we heard MLA it sounded a lot better and was more versatile. We can either fly it or pole mount it and we won’t get into a situation where the weight is too heavy for the flybars.” 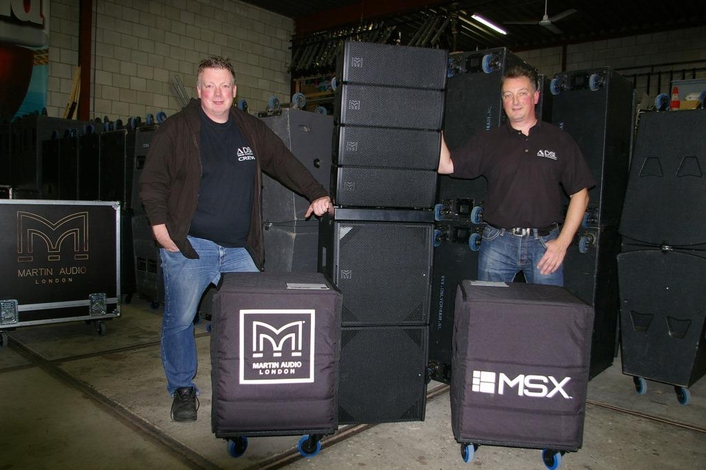 They promptly ordered 16 MLA Mini tops and four MSX 15” reflex loaded subwoofers, and after receiving their induction from Martin Audio’s experienced Andy Davies and Simon Honywill, they were ready to go. “Our idea was to run eight boxes a side, and boost the LF with extra S218X subs when further kick is required for a rock show, or scale it back for an acoustic singer/songwriter.”

They emphasise that the support they receive from TM Audio also played a vital role in the decision-making — and both TM Audio’s Rudolf Nagtzaam and the Gomes brothers agreed that given DSL’s work profile, the ultra-compact MLA Mini perfectly meets the requirement for a typical production.

“Our customers are already getting used to the fact that we have this system,” says Gert-Jan. “Technicians keep requesting it and are lining up to use it.”