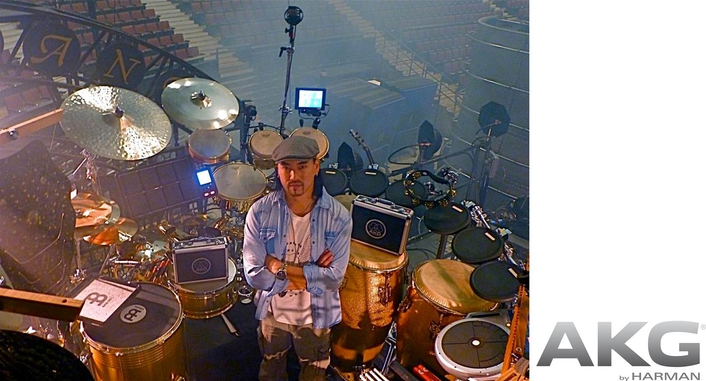 During live performances on tour and in the studio, Hirano also utilizes the classic C414 for overheads
Trained in multiple aspects of rhythm, ranging from classical, Afro-Cuban and Brazilian to West African, Middle Eastern, Japanese and Indian, percussionist Taku Hirano, while touring with the internationally acclaimed Cirque Du Soleil – Michael Jackson: THE IMMORTAL World Tour, is utilizing his down time to host drum clinics throughout Europe.

Traveling with a complete HARMAN AKG microphone set, Hirano relies on the functionality and clarity of AKG to provide first-class instruction and an unforgettable experience, while teaching the fundamentals of his art.

During his clinics, Hirano’s percussion set is mic’d with two C214’s for overhead capture, a P2 for the Cajon, one P17 for the artist’s signature ‘Handbale” – the timbale played only by hand, one P3 on a stand for speaking during the clinics, a P4 for the Bongos, and C518M’s clipped on his congas.

During live performances on tour and in the studio, Hirano also utilizes the classic C414 for overheads.

“I’ve been part of clinics in the past where a lot of time, the artist or performer is subject to use whatever equipment the backline companies provide,” said the percussionist.  “My AKG mics came straight out of the box and provide a pristine sound.  With AKG, my sound actually gets better as I’m able to hear every nuance I play.  The gear is working out great as I continue to delve further into playing for the students and prospective percussionists.”