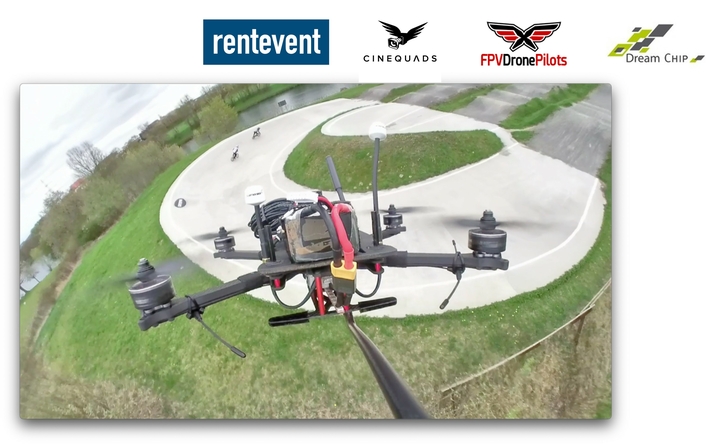 The collaboration saw the mounting of Dream Chip’s Atom One on a high-speed, professional-grade drone, piloted by Fleche and Freybott, which was then used to live broadcast breathtaking and unique shots at rapid pursuit action segment.

Most notable about the undertaking was that the drones managed to achieve speeds of up to 100mph whilst shooting in HDR; a first-of-its kind undertaking.

In developing a next-level drone-based production tool, Beeskow and Schüler were seeking a camera that had the physical properties needed to have little-to-no impact on drone functionality, whilst still providing exceptional image quality. The AtomOne and AtomOne mini AIR delivers this not only in relation to resolution and HDR capability, but also in the ability for users to manage broadcast standard values as White Balance and Chroma values remotely, along with remote iris control at the Atom One mini for the deployment of more sophisticated cinematography techniques.

After initial consultation and engineering to combine the drone and camera, a number of test runs were undertaken. Each run produced consistently exceptional video quality and previously unmatched in-air recording speeds. The camera was able to achieve live playout and the undertaking provided a proof-of-concept that demonstrates the potential of the AtomOne mini series as a drone addition in a substantial range of live and recorded production environments, from sport to cinema.

Speaking of the collaboration, Schüler said: “Drone videography represents the confluence of two very different, discrete disciplines. But the paradox is that they cannot exist independently - each technology has a bearing on the way that the other one can be applied. It’s very much a symbiotic relationship; the physical features of the camera impact the aerodynamics of the drone, but at the same time, the movement and function of the drone impacts the nature of the images that can be captured. In general, compromises need to be made on one side or the other.”

He continued: “The AtomOne mini AIR reduces this compromise to near zero. Drone producers are trying to push the capabilities of their cameras, but their expertise lies more in the realm of in-air technology than it does in cinematography and broadcast.  Combining the best in drone technology with an AtomOne mini AIR facilitates exceptional image quality whilst being robust enough to endure challenging flying conditions, and small and lightweight enough to have minimal impact on the aerodynamics of drone. In term of RF drone production, it’s something of a holy grail’.

Taking up on Schüler’s point, Phil Freybott talked of the flying process: “Drone production is seeing a meteoric rise. But skilful piloting and skilful filming are still locked in something of a battle between themselves; the high-speed tracking of an object with quick directional change is very possible to achieve if you’re a skilled pilot, but that doesn’t necessarily translate into good cinematography. Drones – when used as cameras – are still better suited to slow, top-down panning shots, rather than high-speed, immersive tracking. But with the AtomOne series, we’ve proved that you can achieve 100mph speeds and still deliver exceptionally crisp, striking video. This has the potential to revolutionise the potential of drone videography.”

“We’re incredibly proud of our involvement in this project,” said Sales Director Stephane Ducobu. “Indeed, that’s one of pleasures of working as part of Dream Chip; we’re constantly involved in ground-breaking production projects where the boundaries of what can be achieved on film are being pushed on a daily basis. Our focus on innovation isn’t just about miniaturisation for the sake of it, it’s about delivering a tool that production professionals can use in an increasingly diverse and creative number of ways. Ultimately, we share the mission of our customers: delivering an audience experience that excites, immerses and creates emotion.”

Dream Chip Technologies GmbH (DCT) is the largest independent German design service company, with more than 100 engineers in Germany and the Netherlands. We specialise in the development of large ASICs, FPGAs, embedded software and systems, with a strong application focus on automotive vision systems. The innovative company provides vision technologies and solutions to its clients. DCT develops and manufactures the world’s smallest fully integrated professional 2K and 4K SDI cameras: the ATOM one 2k and ATOM one 4k. Both are almost as small as action cams but with all the professional features broadcasters expect. DCT also delivers to the broadcast market high speed cameras, real time flicker removal and 4G/LTE video streaming solutions.