The concerts, which took the form of elaborate jam sessions, were all multitrack recorded for subsequent mixing and broadcast on the internet.

"Our aim was to create a library of completely original Kyteman material," Sjoerd Terpstra says. "None of the songs were written in advance – they were all improvised on the spot."

Founded by Colin Benders (aka Kyteman), the Kyteman Orchestra plays a mixture of hip-hop, opera and jazz laced with melodies and raw beats. Its first album, The Hermit Sessions, was released in 2009 and was a great success in the Netherlands where it reached the top five of the Dutch Album Charts and sold over 75,000 copies.

Sjoerd Terpstra, who has been working with Kyteman for the last five years, says he chose DPA microphones for this project because he knew they were capable of delivering studio quality from the live stage. The microphones were supplied by Amptec, DPA's distributor in the Netherlands. 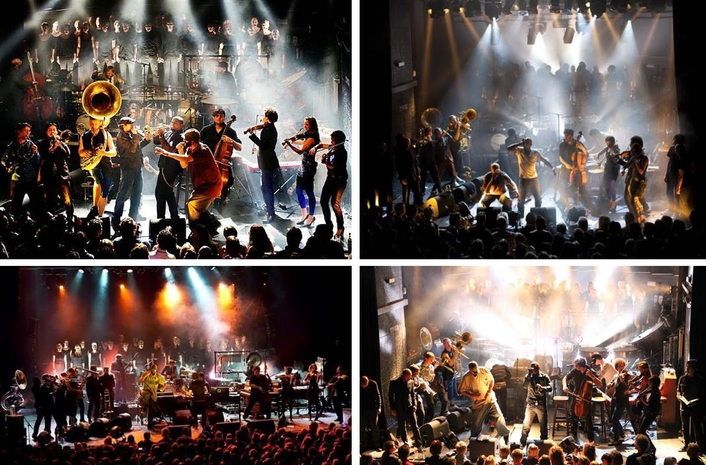 "There are approximately 18 musicians in the orchestra," Terpstra explains. "We used a lot of DPA d:vote 4099™ Instrument Microphones on strings and horns, a d:dicate 2011A on the drums and percussion and a set of d:screet 4061 Miniature Microphones on the upright piano because they sound amazing, especially at low noise levels. One of the snare drums initially gave me a lot of trouble because it was so low pitched and I just couldn’t get it to sound right, but eventually I used another d:vote 4099 and then it sounded great. The d:vote could handle the low pitch well and gave me enough 'snap' to make it cut in the mix."

Terpstra adds that the d:vote 4099 Instrument Microphones were especially useful because they were able to deliver very isolated sound.

"We were recording on an exceptionally cramped stage so this was an important feature," he says. "The isolation they achieved gave me tons of possibilities in both the FOH and studio mixes."

With the latest Kyteman Orchestra project now completed, Sjoerd Terpstra is now working with a number of bands from the Middle East.

"I am hoping to use DPA microphones for some of those projects, too," he says. "I am always happy with the results I get from DPA so have no hesitation in recommending them to all the bands I work with."