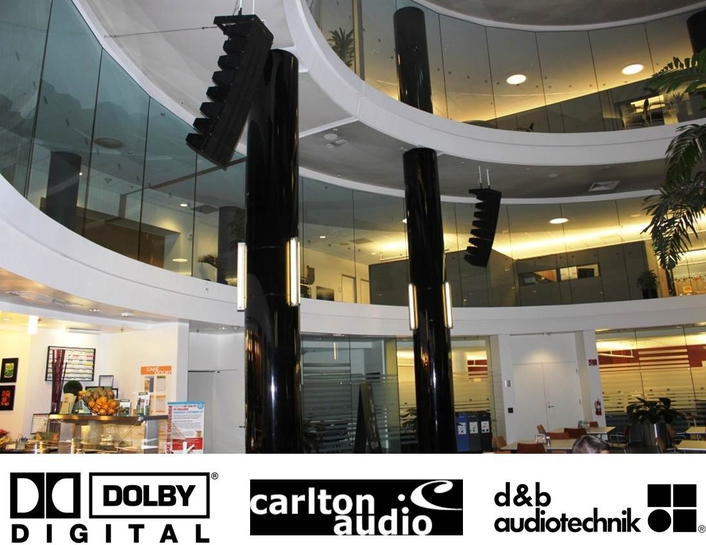 The glacial exterior of the Brannan building conceals a typical high tech' environment within
Dolby Laboratories has its headquarters in San Francisco spread between three buildings sat each side of Central Freeway 101 south east of downtown. While the headquarters at 100 Potrero is an anonymous brick building typical of the sprawling semi industrial flatlands in this part of the city, the newer 999 Brannan is possessed of an all together more striking architecture, its four storey glass block walls entirely in keeping with the modernist influence that Dolby has exerted so subtly upon all our lives since the 1960's.

Dolby is not a technology company that feels the need to impose an ostentatious presence; like its world leading endeavours in the field of noise reduction and sound purity, Dolby is a quiet member of the community. But there are times when it needs to get its message across, not least when communicating to its own employees. The glacial exterior of the Brannan building conceals a typical high tech' environment within, and it's here, in the building's main atrium that mass communication takes place; like everything else Dolby does, it's an area that requires acoustic considerations, as Dolby's Jim Hilson explained.

"The atrium is a fairly large area, we can get about 175 chairs laid out on the floor, then there are three perimeter balconies each getting shallower toward the top; with people hanging over the railings up there we can address maybe three hundred in total. The problems are twofold, the atrium is entirely glass walled, horseshoe shaped, so it's a very unpleasant acoustic environment. For addressing such a number of people intelligibility is hard to achieve but obviously, very important. The other thing is the demand for its use is only occasional, maybe just four or five times a year, so it was difficult to justify the expense."

Fortunately, though no one should be surprised, Dolby had amongst its alumni a man recognised as one of the world's leading experts in live sound. "Bruce Jackson came over from our Sydney Australia office to an atrium event some time ago. A PA system had been brought in and placed on the ground floor pointing up; they'd done it that way because that's what they'd been told to do. The results were terrible so, as only Bruce could do, he was able to intervene and offer a solution. More importantly he was able to speak to the right people and get the funding to do it. You might think Dolby Labs of all places would address such needs immediately, we do have a fair few sophisticated listening rooms here, one is NC14 and it's an old brick building, maybe a hundred years old, right next to the freeway. But as I said, there are not that many meetings in here so the question arose, why do we need to spend this money? Bruce took the idea and provided a compelling rationale." 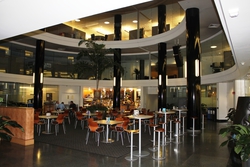 The world of professional audio is all too well aware of Jackson's sad premature demise, but that hasn't prevented Dolby from completing what he set in motion, as Hilson described. "I was brought into the initial meetings with Bruce and Chris Carlton from Carlton Audio Services. I work in the San Francisco area and deal with the trade shows among other responsibilities, so I do a fair bit with live sound. I sat in while Bruce developed the specification with Chris; the two men both worked on Barbara Streisand's last tour and it was here that both got to contend with elements of the d&b audiotechnik loudspeaker range, elements that would form the core of their designed solution.  Bruce's colleague at Dolby in Australia Michael Smithers drew up the detailed installation plan for setting the speakers in various locations."

Smithers takes up the thread, "Bruce and I worked in the same office in Sydney, he'd been talking with the company CEO and when the concept was approved for funding he approached me as he knew I did a lot of live sound work on the side. He asked me would I do the room modelling work for speaker placement and coverage." Smithers used a combination of the d&b predictive software, ArrayCalc, and EASE. "Bruce selected the d&b T-Series loudspeakers himself; he already knew that the quality of d&b loudspeakers in general was very good through his association with the system that went into the Sydney Opera House, and he'd used elements of the d&b Q and J-Series on the Barbara Streisand tour. Their new T-Series presented all the right elements of pattern control, transparency, and fidelity for this particular environment, so we didn’t need to make comparisons; we just jumped straight in there with that system." 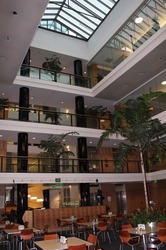 “Despite the glass walled environment the room was not as bad as I expected; in fact I only needed to model the ground floor really accurately, for the higher levels I just worked with volume calculations. That gave the locations beneath the second floor overhang from which we could hang the arrays. The two main arrays would cover across the room to the opposite side, though in the final selection both arrays overlapped and pretty much covered the whole area together. The main consideration was really about vertical control; I started with five or six cabinets and kept adding till control down to about 300 Hz was achieved; as a speech based system we just EQ'd out much of the low end. We could have added more cabinets and pushed control down the frequency range but there was little point and in the context of the atrium would have looked a bit silly. However, we did also acquire some subs, d&b B4 cardioid subwoofers, as the atrium can also be used for music events and does a good job." The installation was made by Carlton Audio; Chris Carlton's own company is a d&b Partner in the USA. The only deviation from Smithers' original PA system description being the addition of  d&b E8 loudspeakers, a small two way enclosure for additional surround sound when required and a touch of fill in one particularly awkward to reach area.

Hilson oversaw the installation, "we brought in a local contractor to run the cables and hang the speakers while Chris actually put together the system documentation, what it was supposed to do, and how it would hit the room. Although the install went in during our Christmas break the sudden loss of Bruce slowed things for a while. We restarted in March this year and discovered fairly quickly that the flown speakers on the balconies had been slightly misaligned from the original plot. Because our usage wasn't great that situation didn't get addressed till June." Carlton picks up the thread, "we flew in Rodrigo Herrera one of our own d&b specialists; Rodrigo had already trained Dolby's operations staff headed by Jim Brundage in the use of the system, so he was completely familiar with the project." "And he quickly made the necessary adjustments," chimed Hilson. "We eventually did our first proper event using the whole system mid August and it sound a hundred times better than the previous system, everyone was amazed at how good it sounded, even in a room as difficult as this one."