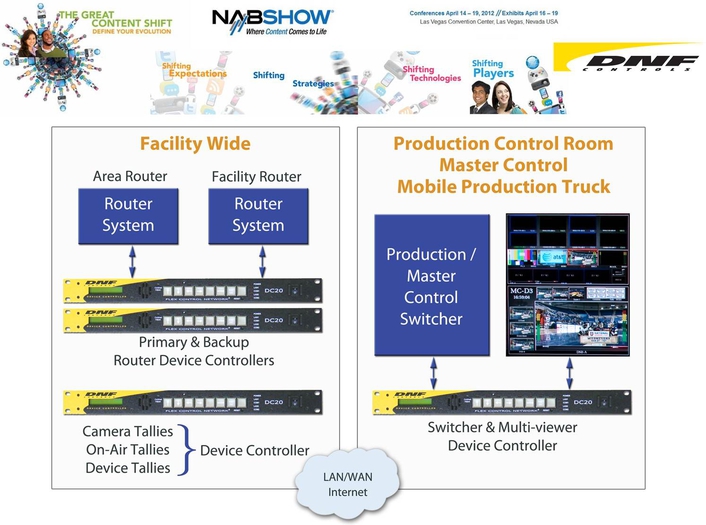 New Application Ensures the Red Lights Go on With Renewed Level of Simplicity
DNF Controls today announced Tally Manager™, a tally management application of the Flex Control Network®, DNF's modular platform of professional, IP-based machine controllers. Tally Manager gives broadcasters reliable and responsive tallying that is simple to set up, simple to use, simple to expand, and simple to maintain. Tally Manager provides a complete system for end-to-end management of monitor wall UMDs, on-air, record, and device tallies, making it easy again to turn the red light on. This scalable, real-time tally solution was designed and built for the demands of television broadcast, live production, and event production.

Tally Manager's Ethernet-based architecture means tallies pass effortlessly between rooms, between floors, across campus buildings, to remote trucks, and around the world. Tallies are fast and responsive, updating the monitor wall in less than a second whenever a change is made. Tally a studio "on-air" when punched up in master control, a broadcast operations center, or a network operations center. Tally a mobile/OB production truck when one of its cameras or outputs is selected for air. Also, it is easy to create complex and conditional tallies when on/off is not enough.

Due to Tally Manager's ease of use, broadcasters can quickly and easily change room configurations themselves instead of waiting for factory support, thereby saving time and money, and most important, keeping the client happy. With Tally Manager's distributed design, room configurations can be changed or restored while other rooms are still in use. The system's distributed architecture also provides built-in redundancy, maximizing system stability and minimizing single points of failure.

Tally Manager simplifies the TD's control over the monitor wall through a simple-to-use Web-browser-based interface for entering new aliases or restoring a previously saved alias configuration file. The TD makes only one entry regardless of how many places a video source appears on the wall.

"Facilities are pressed for time and resources. They need a way to manage tallies that is not only fast and reliable, but easy to set up and use as clients and their needs change," said Dan Fogel, CTO of DNF Controls. "DNF's Tally Manager offers unprecedented simplicity. Case in point: DNF recently did a major installation of five production control rooms in just four days, and the facility was on the air with it on the fifth day — an accomplishment that speaks to Tally Manager's ease of configuration and use."

Tally Manager includes at least one of DNF Controls' field-proven Flex Control Network device controllers, which are connected via GPI, serial, or Ethernet to major signal-path devices — master control switcher/ production switcher and video router(s) — and to the monitor wall multiviewer. Leveraging the device controllers, Tally Manager monitors the signal-path devices, looking back to the originating video source name and what is selected on the PGM bus of the production switcher or master control switcher, to control the primary and secondary tallies, as well as UMD text on the monitor wall.

DNF Controls will demonstrate the new Tally Manager at the 2012 NAB Show, in booth N2115.