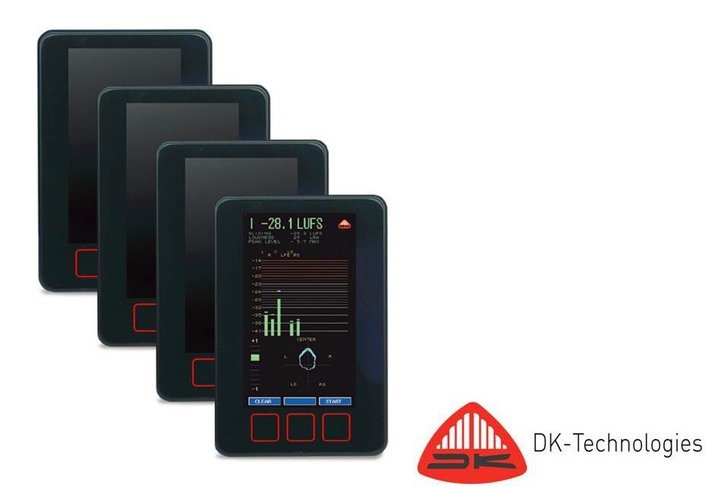 .
DK-Technologies has announced the availability of its DK3 meter AND added the brand new DK4 meter to its award-winning DK METER family.

Building on the already impressive DK METER Loudness and Audio toolbox, DK4 adds FFT Spectrum analysis, Screen Grabber and the classic MSD Meter Landscape View as standard features. These features are all optionally available for the other meters in the DK METER range.

To coincide with the launch of the DK4, DK-Technologies has also introduced an integrated set-up Wizard that takes DK Meter user friendliness to a whole new dimension. With this quick set-up guide, engineers can get to grips with DK’s powerful metering technology in a matter of minutes, thus giving them a head start with any meter in the DK range.

Jacob Hänel Christensen, Sales and Marketing Director for DK-Technologies, says: “With the addition of DK4, the DK METER reach has once again been expanded.  Broadcasters and Post Production engineers can now monitor everything from compliant Loudness Measurements and True Peak readouts, through to detailed Spectrum Analysis.”

In common with the other meters in DK-Technologies range, the DK4 is compliant with all known loudness recommendations including; EBU R128, BCAP, ATSC A/85, ARIB, ABC, AGCOM 219 & ITU BS1770-2. Alongside StarFish™, Vectorscope and Moving Coil Emulations, new software features also include ‘Eye Width’ Instant SDI signal quality read out.

Since the launch of DK1 in 2011, the DK METER range has been rapidly adopted by broadcast and post production companies because it meets industry demand for cost-effective stereo and 5.1 metering, including loudness. No bigger than a smart phone, all of the meters in the range are easy to install and can be powered from a computer USB port, making them ideal for location recording. They are supplied with standard DK-Technologies meter scales plus the industry-standard StarFish™ and deliver conventional metering as well as loudness metering at the same time, on the same display and in a single box. Pricing for these products is highly competitive – starting at just $1499.00 in the US and €995.00 in Europe.