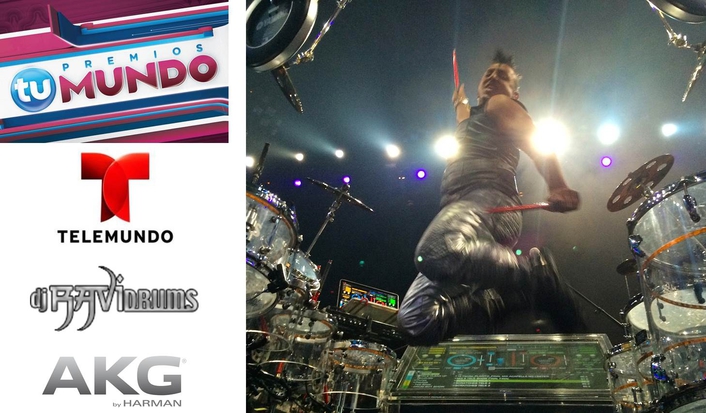 Jakhotia combines his drumming skills with an interest in modern DJ applications, such as digital turntables. During the primetime show, his setup featured the Dream Screen 3000 with customized surrounding drums, situated on a separate platform in front of the main stage.

“The show was about big giant Brazilian Samba sounds, consisting of percussion, electronics and proper acoustics,” said Jakhotia. “Getting the acoustics to meet the electronics takes a lot of work, but the AKG C518 microphones helped me do all that and generate a more powerful presence.”

As Jakhotia delivered an audiovisual spectacle in the middle of the arena, the AKG microphones held their own and delivered more than just world-class sound. “In this age it’s all about ease of use and reliability, which these microphones definitely have,” Jakhotia said. “Even after hitting them with my drumsticks many times, they never fail.”

In addition to the Awards event, he also uses an AKG D12 microphone for the kick drum for some shows, and AKG C414 microphones at his home studio.

“I just love the C414’s, as they’ve always been legendary and made me fall in love with AKG ever since I was a kid,” said Jakhotia. “The punch and clarity is there, making the electronics sound beefy and the acoustics sound complete. It’s challenging but thanks to AKG, I can always find the right balance.”