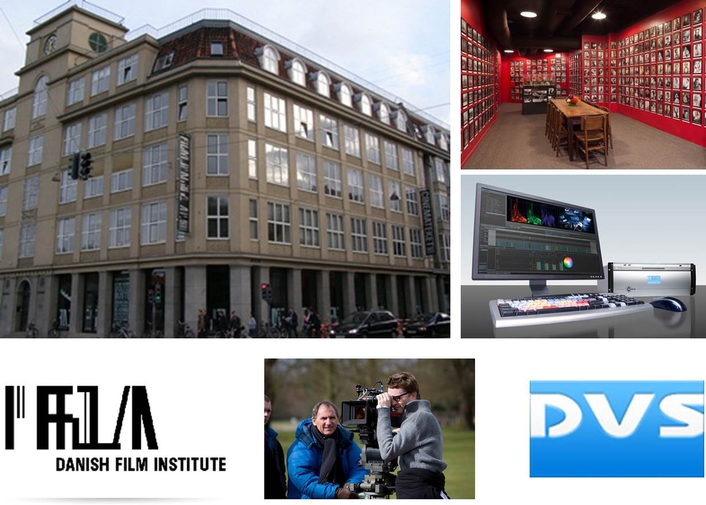 CLIPSTER® integrates seamlessly into the existing system architecture at DFI offering enormous flexibility
A DVS CLIPSTER® is complementing the post production workflow at the Film Workshop/DFI in Copenhagen. In a support program run by the institute, talented youngsters are being given the opportunity to realize film and TV projects using professional equipment. Thanks to the DI workstation, the granted film crews get to experience real-time RAW workflows and high-speed DCI Mastering at first hand.

Since the summer of 2011, a DI workstation CLIPSTER® has been helping talented youngsters at the renowned Danish Film Institute (DFI) in Copenhagen to prepare for working in the professional film and video business. As a government agency the DFI is supporting and promoting film and cinema culture in Denmark, and as part of a support program it is offering talented youngsters the opportunity to realize film and TV projects under professional working conditions. For this purpose, DFI provides the granted film crews with full access to all the equipment and facilities they need for their projects: from cameras to a complete post production workflow right through to the latest in cinema auditoriums.

Up and coming directors like the Berlinale contender Fenar Ahmad (“Megaheavy”) and the Sundance participant Mads Matthiesen (“Dennis”) both started their way into the art of film making at the Film Workshop... like Lone Scherfig, Aage Rais-Nordentoft and Morten Hartz Kaplers before them. Digital film making has been a major focus at the Film Workshop since 1998. And more than 600 film crews have been introduced to this process.

Thanks to its open interfaces, CLIPSTER® integrates seamlessly into the existing system architecture at DFI offering enormous flexibility. As a feature-rich and powerful DI solution, the DVS system meets the most demanding of requirements such as real-time processing of RAW workflows. Consequently, the RAW content produced by the film projects using a camera, such as a RED or ARRI ALEXA, can be displayed directly, edited in the timeline and played out in parallel in 4K. Furthermore, CLIPSTER® handles all the steps of the DCI Mastering process: from creating the DSM (Digital Source Master) through to generating the DCP (Digital Cinema Package) – everything takes place in a single system. DFI's equipment and facilities offer the granted film crew members the opportunity to get to know their future working environment under real-life conditions.

Jakob Olsson, Technical Director at DFI: "CLIPSTER® supports us in preparing talented youths from all over the world for their future careers. The practical environment is a key element of our talent development program. It is very important to us that we have DVS at our side – a competent partner we can turn to and who will help us with the future expansion of our infrastructure."

Ernst-Joerg Oberhoessel, Sales Director Region Western Europe at DVS: "With our DI workstation CLIPSTER® we're really pleased to be making a contribution to the support program at the renowned Danish Film Institute. This highly professional piece of equipment is helping students gain practical experience under real-life conditions – in doing so preparing them in the best way possible for their future working environment."

About Danish Film Institute
The Danish Film Institute (DFI) is a government agency under the Ministry of Culture and operates in accordance with the Film Act of 1997. DFI activities fall into three categories: Production & Development, Distribution & Promotion, Filmhouse & Archives. The Film Workshop at DFI supports 40 – 50 film projects every year. The grant consist of access to professional equipment, support for basic production cost and technical support.