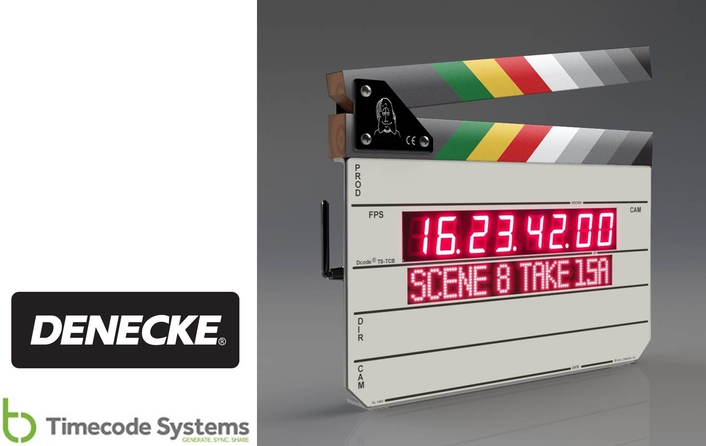 First demonstrated at last year's NAB Show, the IntelliSlate combines the convenience and functionality of a traditional clapper slate, but with super accurate RF-locked timecode readout, transmission of stick closing timecode, and a second ultra-bright LED dot matrix display to mirror metadata from iOS applications. This means that, for the first time, production teams can use a real hardware slate with two-way network communication enabled by the Timecode Buddy system.

"While many users appreciate the capabilities of an app-based digital slate in terms of metadata logging and accurate timecode in a visual slate, many still demand the 'clap,' robustness, and sunlight readability of a traditional slate. That's precisely what they get with this combination of Denecke and Timecode Systems products. We teamed with Denecke — the industry standard for electronic timecode slates — to incorporate all the advantages of Timecode Buddy RF and Wi-Fi networking into a solid hardware clapper," said Paul Scurrell, Timecode Systems managing director. "This collaboration is a boon for production teams that rely on a hardware clapper slate, and it represents another leap forward in Timecode Systems' quest to simplify and enhance production workflows with integrated solutions."

The Denecke TS-TCB Hardware Clapper IntelliSlate now incorporates a Timecode Systems' S1C RF circuit board and a S1C custom display board. Together, they equip the Denecke slate with a highly accurate timecode generator, RF transceiver, Wi-Fi connectivity, and a customised display panel. As a result, the slate puts out timecode, clap stick times, and metadata that is instantly configured and synced, and then remains in perfect harmony all day long, even if RF is momentarily lost.

The addition of the S1C boards makes the Denecke TS-TCB automatically compatible with the entire Timecode Buddy system. The board also allows the Denecke slate to integrate fully into the control surface of the MovieSlate app and Timecode Buddy: app. It also enables compatibility with the other third-party applications Timecode Buddy supports, such as Adobe Prelude® Live Logger, Softron Media Services' MovieRecorder and Multicam Logger, and IN2CORE QTAKE HD.

"Now our customers get a rock-solid, trusted slate with the added value of Timecode Systems' RF and Wi-Fi capabilities, not to mention the incredibly accurate timecode for which both companies are known," said Charles Parra, president of Denecke. "Our collaboration with Timecode Systems has yielded a physical slate with networking capabilities that users can seamlessly integrate into digital workflow apps for content logging and automatically ensure that the displayed slate timecode is constantly in sync throughout the shoot."

Timecode Systems will demonstrate the integration with the Denecke TS-TCB IntelliSlate at the 2015 NAB Show in booth C1134.

About Denecke Inc.
Founded in 1975, Denecke Inc. is committed to providing the entertainment industry with reliable, high-quality time code equipment. All Dcode® time code products are high-stability, precision products manufactured on premises in Valencia, California. The company's goal is to grow with the industry by responding to, as well as anticipating, the needs of the professional.

About Timecode Systems
Timecode Systems Ltd. designs and manufactures timecode hardware and software products that meet the needs of today's shooting practices and recording formats. Whether using one camera in a studio or a whole army of wearables or minicams on location, Timecode Systems' products offer television and film productions an easy and reliable way to generate, sync, and share accurate timecode and metadata wirelessly over RF and Wi-Fi. Since its launch in 2012, the system has become commonplace on reality shows, documentaries, and film sets across the U.K., EMEA, and U.S.