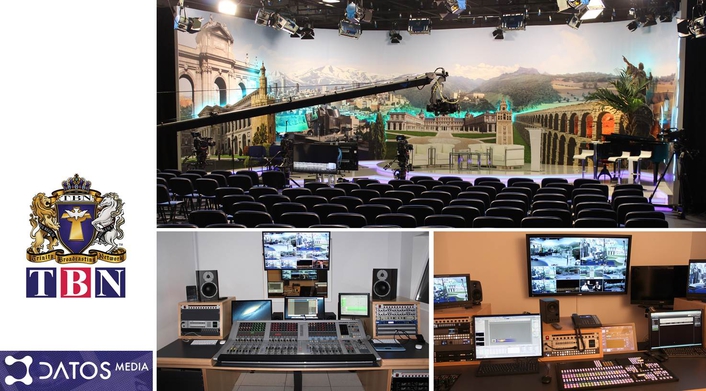 .
Datos Media Technologies, one of Europe's most innovative providers of technological products, systems, and solutions for the broadcast and multimedia production market, announces that it has completed a major high-definition renovation of the Madrid studio and production centre for Trinity Broadcasting Network.

Richard Fleming of TBN Europe noted that the network, founded in 1973 in Los Angeles, has had a broadcast presence in Madrid since the mid-1980s: “Today TBN's Madrid facility serves as the premier broadcast hub feeding programming via satellite to TBN's networks and affiliates throughout Europe, Africa, and the Middle East. Many of TBN's most popular programmes are filmed before a live audience, and the new state-of-the-art studio from Datos Media gives us the latest in HD technology that will keep our production quality at its peak.”

Fleming added that Datos Media, along with its UK-based sister company ATG Broadcast, were the logical choice for the upgrade because of their combined reputations for innovative designs in both live studio systems and digital content management. “Being Madrid-based, Datos is also ideally located to provide ongoing service or expansion support for TBN,” he said.

Martinez emphasised that the entire project was completed on schedule and the new HD studio and production centre are now fully on the air. “This was quite an ambitious project for us, given TBN's reputation for maintaining exacting standards of technical quality,” he said. “We are very pleased with the results.”

About Trinity Broadcasting Network
With 26 networks and growing worldwide Trinity Broadcasting Network is the world's largest faith-and-family television group, airing a broad range of church and ministry programming, Christian music, family friendly movies, children's programming, and shows for teens and young adults 24 hours a day to every inhabited continent via 87 satellites and 20,000 television and cable affiliates. In addition, TBN's most popular global networks are available on computers, smart phones, and other mobile devices, and over 22,000 hours of entertaining and inspiring On-Demand programming is accessible via TBN's innovative online network, iTBN.org.

About Datos Media Technologies
Based at Ciudad de la Imagen in Madrid, Datos Media Technologies S.A. serves the broadcast and multimedia production market with technology, integration, and expertise in workflow implementation. The company is a joint venture between Dan Technologies A/S, a globally active supplier of broadcast and communications equipment, systems and services, and two very experienced professionals: Tomas Nielsen (managing director) and David Martínez (operations manager). Both have over 20 years of experience in the Spanish market, including close involvement in the transition from tape-based to file-based audio visual production.