Kahuna 360 Studio Install Is First in Central Europe to Use Multiple Panels on a Single Mainframe for Shared Operation
Snell announced that Czech TV, the Czech Republic's public broadcasting network, has extended its footprint of Snell Kahuna SD/HD multi-format switchers with the purchase of a Snell Kahuna 360 switcher for live HD studio production, as well as an additional Kahuna 360 and Kahuna 3M/E unit for the network's new, fully-equipped HD outside broadcasting (OB) vehicle.

Czech TV currently broadcasts four terrestrial and satellite channels, including a 24-hour news channel and a dedicated sports channel. The new Snell switchers join two other Kahunas already being deployed in the broadcaster's studio and in an additional HD truck.

"As we continue to make our transition to a fully HD-capable broadcast operation, we're looking for cost-effective solutions that will enable us to deliver the highest-possible quality output to our viewers across the country. With five Snell Kahunas in our operation now, we know we can count on the reliability, flexibility, and multi-format capabilities that have made this switcher technology renowned throughout Europe," said Bajtoš Dušan, engineer, Czech Television. "As we gradually expand and upgrade our OB fleet, we will continue to turn to Snell and Kahuna to meet our live broadcast requirements." 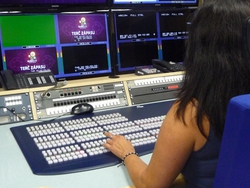 In addition, Czech TV has installed a new Kahuna 360 to supplement a pre-existing Kahuna for live production in its studios 1 and 2, as part of a recent upgrade to full HD production. The Kahuna 360 represents the first Kahuna installation in central Europe that uses multiple panels on a single mainframe for shared operation.

In the studio as well as outside broadcasting, Kahuna 360's FormatFusion3 technology is enabling Czech TV to make a smooth and cost-effective transition to full HD production by enabling operators to continue accepting feeds from SD sources and SD archival content, which can be converted seamlessly to high-quality HD and even single link 1080p for both the A and B level.

"As the Czech Republic's public broadcaster, Czech TV is committed to delivering a premium viewing experience for its audience and constantly strives to deploy the latest technologies to optimize its operations. Czech TV's choice of Kahuna and Kahuna 360 as it upgrades its OB and studio operations to HD is a perfect example of this commitment," said Stefan Geradts, sales director of Central and Eastern Europe at Snell. "We look forward to working with Czech TV as it continues to expand its HD capabilities and keep its operations on the cutting edge of broadcast technology."