Cyberattacks: STRYME keeps you safe and on air

STRYME has forged ahead once more and devised a powerful security package and antivirus protection for its flagship product, the GENESIX VideoServer. Additionally, all data, information and assets are saved concurrently to the redundant backup, mirroring the entire system’s current status. In Austria, ORF no longer worries about cyberattacks.

STRYME and the Austrian Broadcasting Corporation (ORF) enjoy a long-standing partnership. ORF serves about 5 million monthly viewers alone via its two main channels ORF1 and ORF2. Meeting high-level international security standards has always been a prime objective. STRYME has met this objective since day one.

Given a strong convergence in international TV productions and the increasing number of cyber threats over the past few years, ORF and STRYME adopted a proactive stance to tackle these challenges.They stepped up IT security, implemented patch managements on quarterly basis as well as a country-wide escalation matrix, and adapted both structures and the organization to the rapidly changing environment and industry standards. To further boost server protection, STRYME’s IT experts developed a brand-new future-proof solution: a security package with an integrated antivirus software made by STRYME. 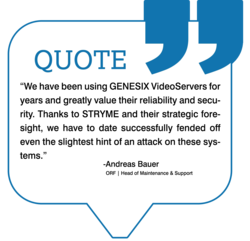 “At ORF, we have been using systems based on GENESIX VideoServers for years and greatly value the peace of mind that comes with their reliability and security. One example is the playout that we have been operating at our 9 provincial broadcasting studios since 2003. Thanks to STRYME and their strategic foresight, we have to date successfully fended off even the slightest hint of an attack on these systems,” says Andreas Bauer, ORF’s Head of Maintenance and Support.“ Thinking about the future, we wanted to be even better prepared. Besides operational issues, preventing economic loss has been a top priority when we asked STRYME to take our IT security to a new level. Their system keeps us safe and on air.”

To boost resilience of a system run on a GENESIX VideoServer, STRYME uses a hardened Windows system, daily update cycles and its in-house antivirus software. This specially developed antivirus software is both a standard and unique feature of the security package. It provides the best possible protection without interfaces and without impacting the performance of the GENESIX VideoServer or the systems run on it.

What’s more, the GENESIX VideoServer and its redundant back-up system operate within a secure network, not in the public domain of the Internet. If required, an exact replica of the system, including the current status of all data, information and assets is readily available. To ensure this high security standard, STRYME recommends its Elite Care Pack, complete with level 3 support.

“We are the very first company in the industry to tackle cyber risks with a security package as a standard feature of the GENESIX VideoServer,” states STRYME CEO Goce Zdravkoski and adds: “It is an extremely resistant and future-proof solution that keeps threats at bay. To maintain this high security level, we keep track of the latest developments and constantly improve and update our systems and the antivirus software. I am proud to say that to date none of the GENESIX VideoServers operated by ORF have ever been hacked.”

The Austrian Broadcasting Corporation (ORF), founded under public law, is Austria’s largest media provider, operating 4 national television and 12 radio channels as well as a comprehensive range of websites. Its main headquarters and studios are in Vienna. The company operates regional studios in all 9 Austrian provinces and maintains a worldwide network of correspondents. ORF1 and ORF2 broadcast a rich variety of programs consisting of current news, in-depth information, documentaries, TV-magazines, reports, talk-shows and other shows, movies, and TV-series. Most ORF2 programs are available throughout the continent via the Astra digital satellite at ORF2 EUROPE, serving Austrians abroad as well as viewers interested in Austria and its culture. In cooperation with the public service broadcasters ARD, ZDF, SRG and SRF, ORF also operates the special-interest channel 3Sat. As a partner of the German-French ARTE culture channel, ORF contributes Austrian programs to the Bavarian education channel Bayern Alpha (Germany).

Located in Vienna, STRYME has been providing and developing tailored professional broadcast and automation solutions for small, medium-sized and specialized broadcasters for more than a decade. The Austrian marketleader is known for uncompromising quality and reliable out-of-the box solutions that simplify, speed up and optimize daily broadcast workflows. When video server reliability matters most, STRYME is the right choice.

As a long-term supplier of the Austrian Broadcasting Corporation (ORF), STRYME is a renowned and trusted industry partner. The company has implemented a wide range of different projects, locally in Austria and internationally, in Germany, Switzerland, Slovakia, Italy, Russia or South Korea.