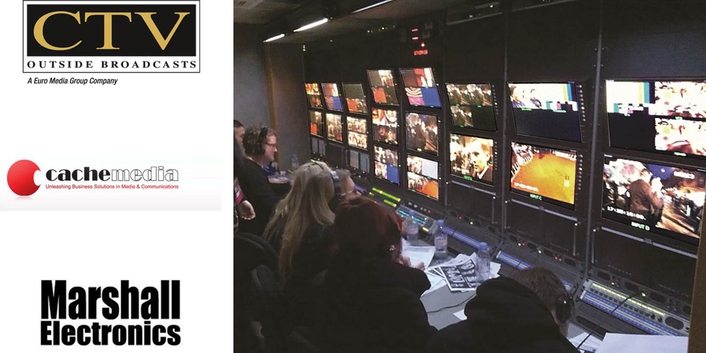 Paul Francis, Head of VTR at CTV said: “The space, weight, power and financial savings of using the Marshall Quads in the truck made them an obvious choice especially when they can also be used with the computer output of the EVS. Having HDSDI with DVI input is a good combination. In total we purchased 15 monitors and have also purchased Marshall monitors in the past.”

“Also we did a job right after BAFTA where most of the Quads were turned into DVI displays for 5 Avid suites around the truck. This feature was a huge bonus in space, efficiency and flexibility.”

Marshall's IMD monitors are a cost-effective "all-in-one" solution for post production houses, broadcasters, and mobile units. This fully-integrated approach eliminates the need for additional or separate Under Monitor Displays and allows UMD information and tallies to be displayed directly within a Marshall flat panel monitor, while saving precious rack space. These new monitors also include the Marshall RotoMenuTM feature which allows fast, direct, and easy menu navigation. This 6RU unit also ships ready to rack mount and can be wall or ceiling mounted with an optional VESA adapter. 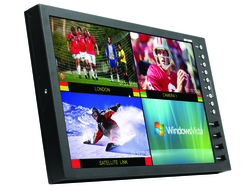 With 10 years experience of supplying video and audio monitoring solutions to high profile customers such as MTV and the BBC, Cache Media supplies a variety of premium quality products including Marshall monitors, SD and HD servers and time delays from 360 Systems, HARDATA TV playout and production servers, Doremi Labs equipment including disk recorders and converters, and Brevity transcoding and delivery products.

Cache Media works closely with the manufacturers to ensure that good value for money products are developed for the European market. Customer support and aftercare is at the heart of the company philosophy. Cache Media is based in Newbury, UK with full test, support, warehousing and office facilities.

For almost 30 years Marshall Electronics has specialised in the development and  manufacture of advanced technology products for the broadcast and professional AV sector. Based in El Segundo,  California, they operate manufacturing facilities in the US, China, Japan, Korea and Russia, along with an R&D Centre in Portland, Oregon.

The Broadcast/Multimedia Division continues to sustain significant growth, and Marshall continues to gain recognition as the leading manufacturer of LCD rack mountable monitors in the world.

CTV has developed into one of the largest and most well-respected independent OB Companies in Europe, with a highly motivated team of television professionals who have established a wealth of experience over many decades. They work with clients as a technical partner offering cost-effective solutions as the programme demands, offering the latest technology in their wide-ranging all HD OB fleet. CTV is a Euro Media Group company, and with OB Partners in Belgium, France, Germany and The Netherlands, delivering  their expertise anywhere in continental Europe – and beyond.