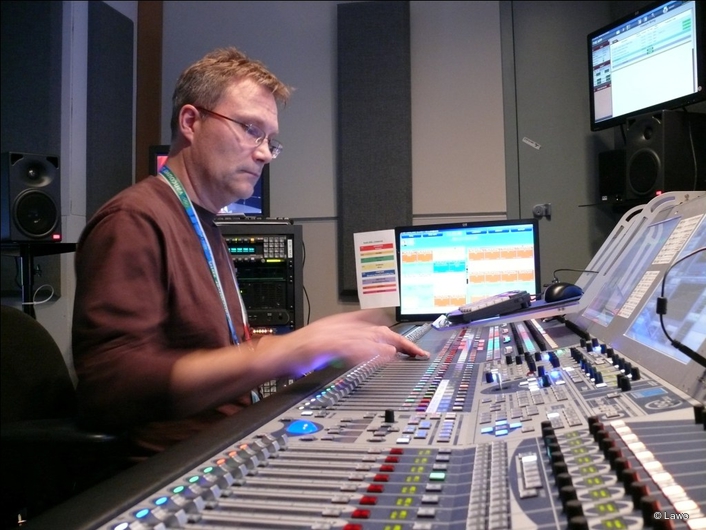 CTV staff engineer Wayne Bauer seated at the Lawo mc²56 console during the Winter Games in Vancouver
CTV, Canada's largest private broadcaster, recently completed a substantial investment in Lawo equipment that was used by Canada’s Olympic Broadcast Media Consortium, a unique relationship between leading media conglomerates CTV Inc. and Rogers Media Inc., which, collectively, broadcast the 2010 Winter Games across Canada. The purchase consisted of seven Lawo systems—five mc²56 consoles and two zirkonXL consoles that were deployed at the IBC (International Broadcast Center) in Vancouver. With the massive project now successfully completed, CTV is already planning for the next big event that will utilize their Lawo equipment.

Robert Miles, CTV’s Manager for Olympics Audio Engineering, discussed the challenges of preparing for the Winter Games. “One of the biggest issues I faced during the design phase was trying to nail down a ‘worst case’ scenario for the capabilities of the large audio consoles that would be deployed at the IBC,” Miles reports. “Purchase decisions were made as far as twenty months in advance with no firm production plan in place. We knew we’d be working in 5.1 surround, but the final numbers of inputs, outputs, downmixes, and submixes was still a variable. The Lawo mc²56 enabled us to expand the DSP and I/O (with DALLIS frames) capabilities should our requirements evolve. Similarly, we could also expand the number of faders.”

“The zirkonXL consoles are a platform that CTV employed in its network prior to this purchase with excellent results,” Miles continued. “Since the zirkonXL is capable of 5.1 surround, it easily became our choice for the two small audio control rooms (ACR6 and ACR7) at the IBC. The Lawo consoles, by design, enabled us to centralize the audio consoles’ cores and DALLIS frames in our IBC CER (Central Equipment Room) and connect all the surfaces remotely using CAT6 cables. Last, but certainly not the least of our concerns, was a further requirement that we be able to re-purpose the consoles within the CTVglobemedia family after the Winter Games. The mc²56 console surfaces, HD cores, and DALLIS frames could be easily re-sized and re-configured, depending on the network’s requirements.”

Miles offered a glimpse of what the technical staff had to contend with during the Games and why the Lawo mc²56 consoles were ideally suited to the project. “The two busiest consoles were located in ACR1 and ACR2,” he said. “These were the audio control rooms for the main English and French productions. These two productions were on-air continuously for more than twenty hours each day and involved three crew shifts for seventeen days straight that took place during commercial breaks. Within a 2-3 minute break, the outgoing operator saved the current configuration for the next day and stepped aside. The incoming operator recalled the previous day’s file, took his/her seat and awaited the return from commercial. While this took place, the associated production control room and studio personnel (including on-air talent) also switched. As the mc²56 consoles were at the center of the production for mixing and monitoring, these transitions had to be accurate and instantaneous. The Lawo mc²56 consoles performed these duties flawlessly throughout our Winter Games coverage.”

Allan Morris, CTV’s Senior V.P. of Engineering, Operations & I.T., was integral in authorizing the Lawo equipment purchases. He shared his perspective on the equipment. “Our Lawo purchase for the Winter Games was a significant investment for us and I’m very happy about the results we achieved using it. CTV has been a Lawo customer for several years and we have a number of systems deployed throughout our facilities. Lawo equipment has consistently proven itself to be highly reliable and very well suited for our various types of operations. We have a large format Lawo console in our Toronto newsroom (which is the largest newsroom in the country) as well as a complete radio system at Toronto’s 104.5 CHUM FM and CP24 Radio 1050. Based upon these previous deployments and the company’s consistently responsive customer and technical support services, we had every reason to conclude the selection of Lawo equipment for the Winter Games would be equally well handled. I’m happy to report this was, indeed, the case and I’m confident our two companies will continue to have a mutually beneficial business relationship for the foreseeable future as we move onto other projects and deployments throughout our organization.”

Lawo, headquartered in Rastatt/Germany, specialises in developing, designing and manufacturing mixing consoles and matrix systems for radio and TV broadcasters, as well as for use in live events. Standards of high quality and innovative technology are supported by nearly forty years experience in the field of professional audio technology. Lawo’s product range covers digital audio mixing consoles for use in radio, broadcast, production and live applications, including the required software. In addition to the provision of matrix systems and audio networks, Lawo also carries out project engineering tasks and acts as a main contractor for radio OB trucks; these services include user training and maintenance. This high level of expertise results in a comprehensive support service for Lawo customers.