Crosscreek to use DFT-12 Units from JFS 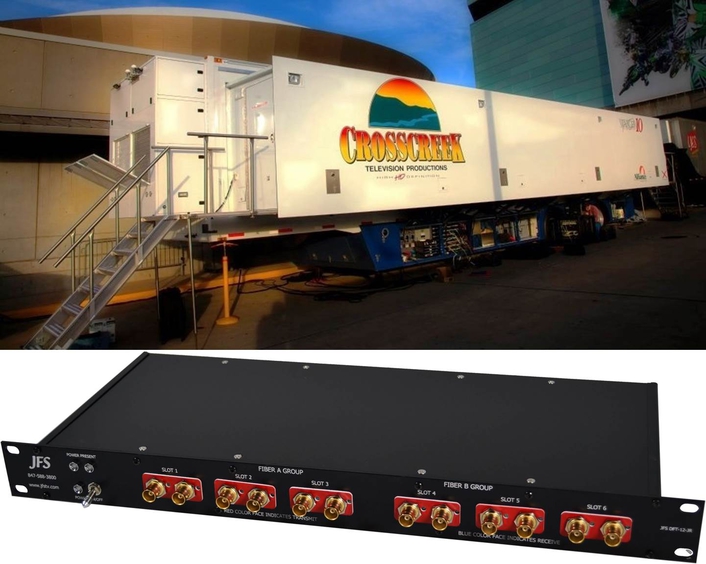 "We are always looking at options to make our clients' shows more efficient and to improve our overall offering to new clients, as well," said Jonathan Cline, engineering manager at Crosscreek Television Productions. "We have heard nothing but good things about the Joseph DFT units, and we haven't been disappointed. The great thing about them is the ability to change the direction of the signal path in pairs. We hope to make them standard across our entire fleet."

Before purchasing the DFT-12JR units, Crosscreek was using multiple single-channel BNC-to-fiber and fiber-to-BNC sets to distribute signals. Now Crosscreek uses two sets of 1-RU DFT-12 units, which are user-configurable in pairs of two in order to meet any send/receive requirements. Crosscreek's normal configuration is eight transmission paths and four receive paths to accommodate its most common booth setup — allowing for eight feeds to monitors in the booth, plus an HD Telestrator and one additional signal to be sent back to the mobile unit.

Crosscreek purchased road cases and racked the units along with a power supply, two HD DAs, and a tie-line panel to simplify setup for whomever would be using the gear that day. One end of the unit lives inside the truck, and the case goes wherever the signal feeds are needed. The DFT-12JR, like other units in the DFT Series, comes standard with redundant power supplies to ensure a complete backup of critical paths. In addition, full-fiber redundancy with automatic fail-safe switchover is available as an option for all DFT Series frames.

So far Crosscreek has used its DFT-12JR units for a major horse-racing broadcast that required its OB trucks to receive feeds from the in-house facility at a significant distance from the TV compound. In the future, Crosscreek will put the units to work on NHL, NBA, college football, and college basketball broadcasts to send feeds to a booth, tie into the house cabling, or share feeds among mobile units.

"We created the DFT Series of signal transport boxes to improve truck signal interconnection and distribution, and Crosscreek is a great example of this," said Yohay Hahamy, president and CEO of Joseph Electronics. "The DFT-12JR boxes not only make set-and-strike faster and easier for Crosscreek operators, but they also make it possible to move the OB trucks farther away from ever more crowded TV compounds without compromising quality or performance."

About Joseph Electronics
Joseph Electronics (JE) is an authorized stocking distributor for more than 100 premier broadcast and pro A/V brands with stocking locations in both Illinois and California. Its full-service fiber division, Joseph Fiber Solutions (JFS), designs and supplies innovative custom fiber solutions — such as the Caddie Series, DFT Series, and 4K Studio Caddie — for broadcasters and system integrators alike. Equipped with a state-of-the-art fiber lab staffed with fully certified professionals, JFS can fabricate, terminate, or repair any connector, assembly, panel, breakout, or interface in use today. JE has served the broadcast industry for more than 65 years and has representatives in California, New York, Georgia, and London.