Creative shooting with the System Cine 30 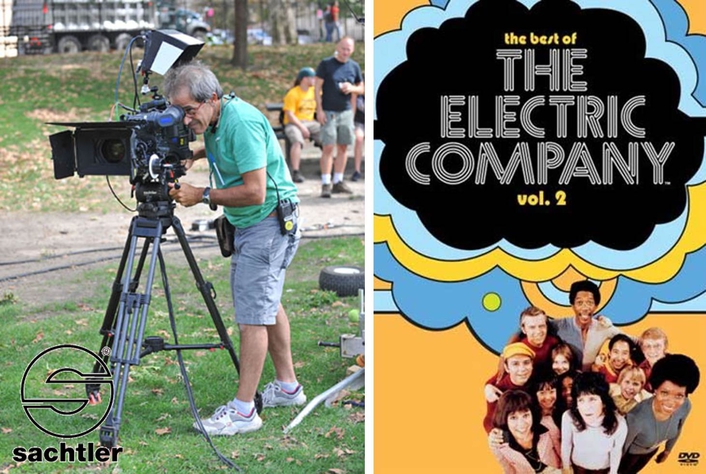 Bill Berner filmed an educational series for children using the System Cine 30 from Sachtler.
The Electric Company from Sesame Workshop/PBS, is a location-based film-style digital shoot set in a “big city” restaurant where a group of eclectic young people in a society called The Electric Company meet. They use their “secret” powers for good. They scramble, recall, project and animate words in different ways – always trying to stay one step ahead of their nemesis – The Pranksters. Cinematographer Bill Berner used a System Cine 30 HD from Sachtler, a Vitec Group brand.

“The show is shot with two Panasonic AJ-HPX3000 cameras equipped with cine-style zoom lenses, matte boxes, follow focus, and zoom and iris motors, so the weight really adds up,” explains Berner. “Having a Sachtler System Cine 30 HD gives me the confidence to be able to walk away from the camera and know it will still be there and ready when I come back.”

“One of my favorite setups is when we had to shoot both sides of a cell phone conversation with two characters walking down different streets in matching medium shots, allowing both back and forth cuts and split-screen effects,” he recalls. “We laid track down the middle of a Manhattan sidewalk, put a Ubangi on our dolly and mounted both heads at the extreme outsides of the plate. My A-camera operator and I mounted up with our cameras facing opposite directions. We had our actresses walk and talk along at matching speeds while the dolly grips took us for a ride. Two takes later we had the entire scene with terrific performances because the ladies were able to play off each other in real time.”

Berner has also mounted the heads to a HiHat rigged to the lighting grid. “The head and mount were vertical so the camera could point straight down for a Busby Berkeley style shot,” he explains. “That’s a hell of a lot of torque to be putting on the head, but I had no worries that the Sachtler could take it. I’ve had Sachtlers in the dirt, on top of 14 foot ladders that were in turn on top of trucks, mini-jibs, and pretty much everywhere else in-between,” he adds. “And they have never disappointed me or given me a moment’s concern.”

Gravel, Dust and fast Teams
Sachtler at BVE 2011
Sachtler Support at “The Defenders”