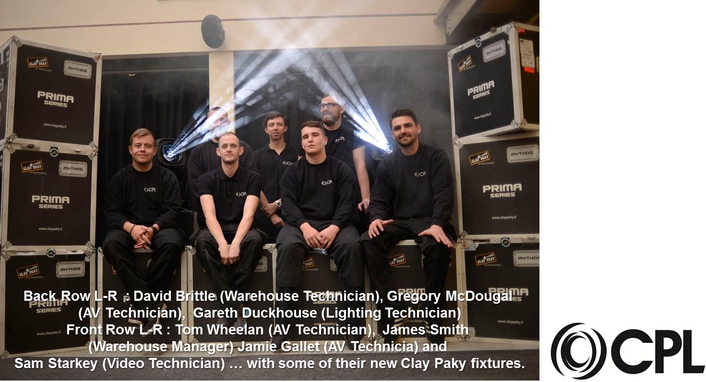 .
Central Presentations Limited (CPL) invested over a quarter of a million pounds in May, primarily in new lighting and rigging equipment, in preparation for an extremely action-packed summer.

The busy west Midlands based technical solutions specialist supplies full production – lighting, sound, video, rigging and staging – design and equipment to a diversity of live shows – from music and film festivals to corporate and industrial presentations to special events.

Business has increased generally for CPL in the last 12 months, and the Lighting Division is currently expanding rapidly in response to this organic growth which has prompted the latest round of premium brand purchases.

The existing stock of Clay Paky lighting fixtures is boosted with the addition of 16 x Mythos and 10 x A.Leda K10s with B-eye lenses, bringing the current total of moving lights available in-house to around 200.

These are joined by 20 x ETC Source Four LED Series 2 Lustr units with Fresnel and lens tubes. These innovative fixtures feature ETC’s x7 ‘Color System’ plus a lime green LED that increases the unit’s lumen output in ‘open’ white and lighter hues, making them livelier and more closely matched to the colour and tonality of a conventional Source Four.

Forty ETC Colour Source LED PARs have also been added to CPL’s stock of LED fixtures, highlighting the popularity of LED technology, fed by increasing trends for events wanting to enhance their green and energy-efficient credentials.

Continuing down the LED path, 16 of Philips’ popular Nitro strobes were also on the CPL list together with 100 x ProLights SmartBat battery powered wireless LED uplighters. “LED uplighters are fantastically handy and now a ‘must-have’ item for numerous event applications” says CPL’s Matthew Boyce, “You can just never have enough of them!”

On the control side, four new Avolites Quartz consoles join the existing fleet of Avo and Jands consoles. The powerful and intuitive Avolites programing architecture is favoured by many of CPL’s lighting designers.

This is a combination of H30V and H40R products, Prolyte box corners and MPT Towers, together with Prolyte’s proprietary Aetos half-tonne and one tonne motors. “Prolyte is reckoned to be one of the best internationally recognised trussing systems and is extremely dynamic,” explained Max, “We have been buying into it for some time and needed all these additional elements to facilitate the summer projects that are already confirmed.”