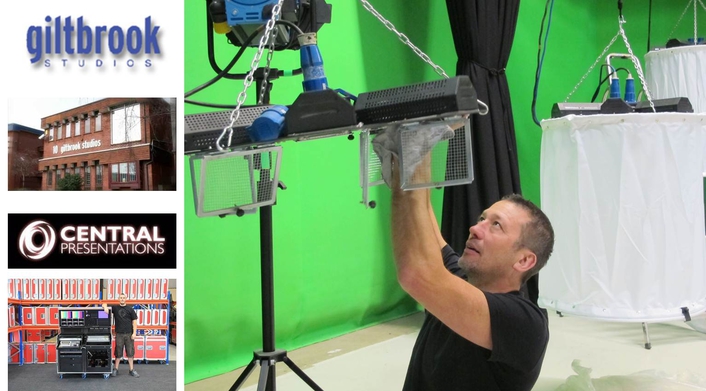 Giltbrook’s Andy Swain setting up some of the new lights
West Midlands, UK, based video and production specialist Central Presentations Ltd (CPL) will be the main supplier of specialist broadcast and AV equipment to the re-launched Giltbrook Studios in Nottingham.

Giltbrook offers a cutting edge facility in the heart of the Midlands for all types of productions from drama and commercials to business television, infomercials and green-screen shooting.

The project to rejuvenate and bring the space right up to date – originally opened as a purpose-built, sound-proofed TV studio in the 1970s -  is the brainchild of TV professional Andy Swain and other key individuals with extensive broadcast industry experience, who have teamed up with studio owners, Finishing Post.

Says Swain, “Many people have fond memories of working at Giltbrook over the years and the ‘new’ Giltbrook will be a vibrant and exciting space with great functionality and a modern infrastructure that will allow creativity to flourish. It will also be a cost effective option, and we look forward to a long and fruitful working relationship with CPL and Finishing Post on this project”.

This completely new era Giltbrook Studio has benefitted from a substantial programme of reinvestment, re-equipping of the studios including a new lighting rig, and a completely new mind-set, plus the association with CPL.

All of these elements have already energised its new lease of life.

The 1300 square foot facility is ideally located just off Junction 26 of the M1 motorway outside the city of Nottingham – and is the only space in the Midlands offering such a complete, fully-flexible, multifunctional studio solution.

It has a 360 degree blackout, a permanent green-screen on two walls which has been augmented with a new infinity cove on the other two walls effectively creating two easily accessible studio environments in one space. The infinity cove will be of great interest to producers who have been demanding it for some years!

The new lighting package includes 6Kw space lights and eco-friendly Kino-Flos amongst a wide selection of other sources. The choice of fixtures is designed to offer the most variety with the lowest carbon footprint. LED fixtures will be added in phase two of the lighting investment.

There is a full multi-track sound system installed which can accommodate any set up from full orchestras to rock bands, music videos right down to single vocals to camera.

Other facilities include a large scene dock / workshop for scenery construction, a pleasant green room and full kitchen. The reception area has also been fully re-energised.

Lee Gruszeckyj head of CPL’s Broadcast division comments, “It’s a great idea, there is nothing like it in the area, and with the contacts that Andy and his colleagues already have, it should be a great success”.

CPL will be supplying extra and more specialised kit to extend the in-house system as required including PPU racks with associated camera and video playback channels – which can be extremely quickly and efficiently deployed and ready to roll.

CPL was chosen to partner with Giltbrook due to the quality of its equipment, their policy of continual investment into new and emerging technologies, outstanding crew and engineers and friendly and approachable attitude.

CPL will also be taking advantage of Giltbrook’s close proximity, offering it to their clients as a new service, which will be ideal in particular for the growing number of web-streamed events that they are producing.

Feedback from the first shoots at the ‘new’ Giltbrook have already been hugely positive, with camera operators and directors very impressed with the choice of equipment and the general speed of set up and excellent organisation.