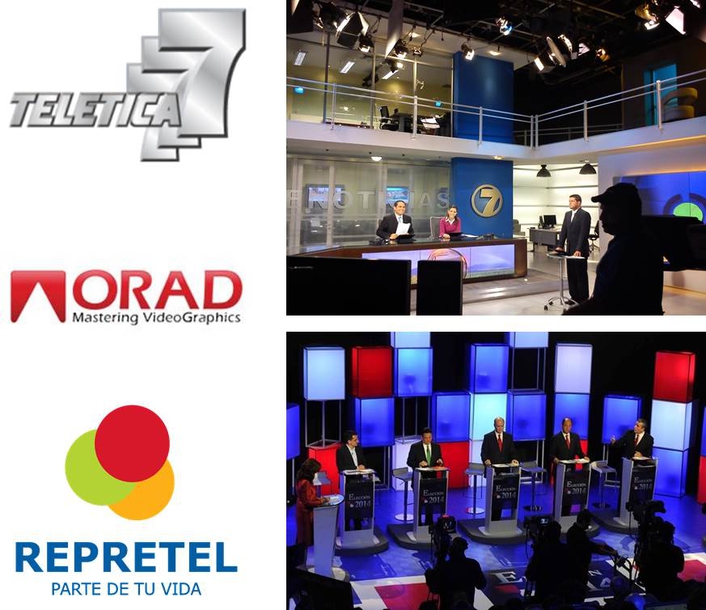 Teletica relied on Orad’s RealSet augmented reality solution and Interact interactive graphics to display linear graphics coming up from the floor with videos of the individual candidates alongside their correlating data. The interactive graphics were controlled from the presenter’s iPad, enabling him to control the flow of the broadcast. In addition, a virtual Parliament was displayed presenting the potential changes in the government’s make-up. Orad’s professional services team worked closely with Teletica designers to create the extraordinary graphics that were used. The graphics were populated with both data from historical databases (Excel) and from the real time Oracle systems which provided the official voting data. Orad’s 3DPlay controller was used to ensure that the entire production broadcasted without a hitch.

“Thanks to Orad’s systems, our vision and graphics came together beautifully. We are very happy with the results;” Alex Porras, Technical Director Teletica.

Repretel offered a different, yet equally captivating election broadcast with Orad’s RealSet augmented reality system by displaying 3D illuminations. Repretel turned their conventional studio into a virtual one by using chromakeying to enable the talent to stand in front of the virtual graphics and to simulate a giant video wall with live video insertions. Repretel relied on native objects and animation that were created with Orad’s 3Designer authoring software, simplifying the process.