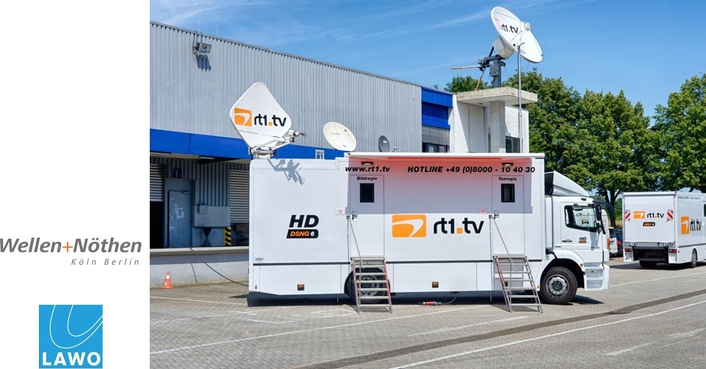 New rt1.tv HD OB truck equipped with latest Lawo technology
Modern and innovative production companies in the TV, film-,and mobile TV broadcast business excel by professional live broadcasting. The most important issue here is a high-quality and reliable satellite link. The HD vehicles of rt1.tv are capable of transmitting and receiving via the DVB-S2 EBU standard and offer a high-quality video and audio control room for multi-camera productions. The most recent member of the fleet and operational since end of 2011 is the HD OB unit HD-DSNG 6; equipped with a Lawo mc²56 as the central mixing console for the sound mix.

The 8+2 camera HD OB van, used mainly for sports and comedy productions as well as for 5.1 productions, was designed by German system integrator Wellen+Nöthen. With a length of 9.45 m the 18 ton vehicle is of compact dimensions based on the Mercedes Benz Axor 1829. All broadcast relevant components are safeguarded by an uninterruptable power supply (UPS).

The mc²56 compact class
The Lawo mc²56 was selected as the mixing console, as it provides – despite its small footprint – the complete feature set and the full performance supplied by all Lawo mc² production consoles. The 16+16 frame mixing console was of optimal dimensions to be integrated into the OB van.

It provides 32 faders and two DSP boards with 96 DSP channels which, after the regularly scheduled upgrade, are now capable of 192 DSP channels. The router offers a maximum capacity of 8,192 x 8,192 crosspoints. Three DALLIS frames are available plus Dolby en- and decoder (571 und 572) and a Virtual Studio Manager (VSM) controller. “Lawo mixing consoles work extremely reliable and provide best user guidance on the operating console. They give the users the freedom to react fast and flexibly on the most diverse formats. This security and flexibility is particularly important in OB truck operation. Furthermore, with its compact built, the Lawo mc²56 console is predestinated for use in OB vans“ explains Wellen+Nöthen’s audio engineer Holger Lentge. 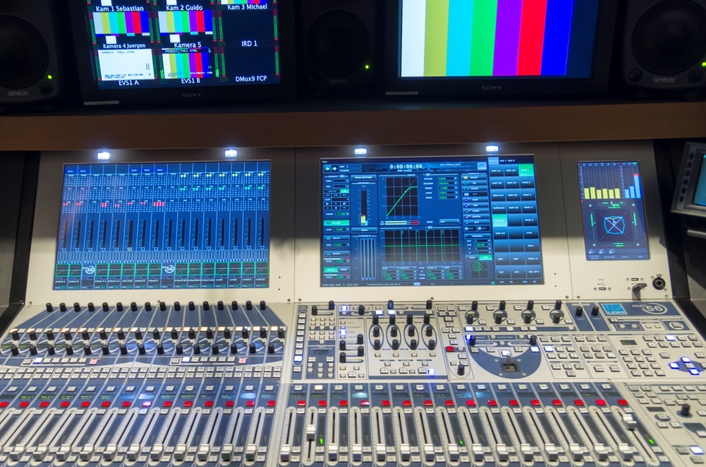 Field-tested
An additional factor is the deep market penetration of Lawo, which brings about that many sound engineers who have at some time worked on a Lawo console. This is another benefit, as there are many different teams working on the HD-DSNG 6. Furthermore, it is possible to integrate a Riedel talkback system via MADI – thus the Riedel Artist system can be optimally implemented. On board, there are seven working places: audio control room, video control room, uplink, video processing, VTR suite, scheduling, and also the editorial suite. “If any changes or adaptations in the technology became necessary, they were carried out fast, efficiently and competent by the responsible Lawo project engineers. The uncomplicated cooperation was certainly one major factor that the project could be timely executed” says Lentge.

Lawo AG
Lawo, headquartered in Rastatt/Germany, specialises in developing, designing and manufacturing mixing consoles and matrix systems for radio and TV broadcasters, as well as for use in live events. Standards of high quality and innovative technology are supported by more than 40 years of experience in the field of professional audio technology.
Lawo’s product range covers digital audio mixing consoles for use in radio, broadcast, production and live applications, including the required software. In addition to the provision of matrix systems and audio networks, Lawo also carries out project engineering tasks and acts as a main contractor for radio OB trucks; these services include user training and maintenance. This high level of expertise results in a comprehensive support service for Lawo customers.