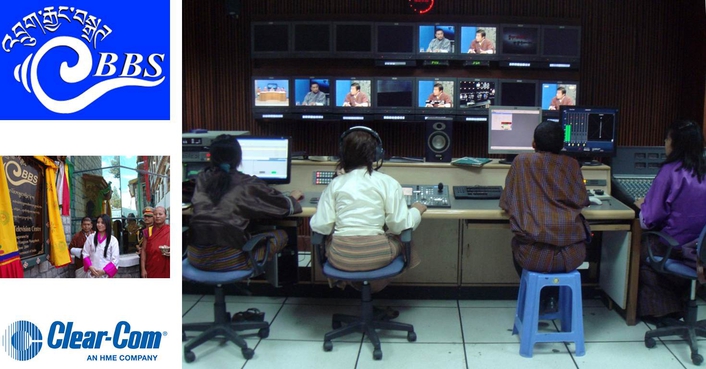 Wireless Intercoms Provide More Mobility and Capability for News and Reality Productions
Clear-Com®, a global leader in critical voice communication systems, provides greater flexibility and mobility to broadcast production communications at Bhutan Broadcasting Service (BBS), the national TV and radio station of Bhutan. BBS is employing Clear-Com’s FreeSpeak and Tempest2400 digital wireless systems to ensure that the critical production cues for its daily news, documentaries and entertainment programs are heard without interference or dropout. By exploiting the wireless and grouping capabilities of both systems, the staff members have also made significant progress to enhance mobility and coordinate their productions more efficiently.

Prior to the addition of the FreeSpeak and Tempest2400 wireless systems, the station’s communications backbone consisted of a wired matrix intercom and a partyline system. While these systems were reliable, the crew needed the additional mobility and flexibility that only a wireless system could provide—particularly for the on-line editor, program director, floor manager and anchors. Because BBS already had a positive experience with Clear-Com’s products in the past, the network decided to turn to the company once again for a wireless solution. With installation of the FreeSpeak and Tempest systems in its news and production studios, the BBS crew and talent enjoy the benefit of wireless mobility, clear communication and wide collaboration.

“Prior to adding the wireless systems, the wired system hampered the movement of the on-line editor, cameramen, floor manager and anchors, especially during the panel discussion, reality shows and talk shows in the production studio. We would migrate to different parts of the studios with the wired beltpacks, but sometimes the cables would extend so far that the beltpacks would get unplugged, cutting off our communications,” says Sherub Tharchen, Head of the Technical Department for BBS. “Now with FreeSpeak and Tempest, everybody can move freely in the studios and stay connected without worrying about the cables getting tangled or the wired beltpacks becoming unplugged.”

BBS has two FreeSpeak systems, one in the news studio and the other in one of its production studios. Active antennas are also distributed throughout the production areas to maximize wireless coverage. The systems operate within the license-free 1.8 to 1.93 GHz frequency band, away from the crowded frequency spectrum where other wireless devices in the studios operate. Moreover, it combines DECT and wireless auto-roaming technologies to allow users to move freely without fading or losing connection in the studios. 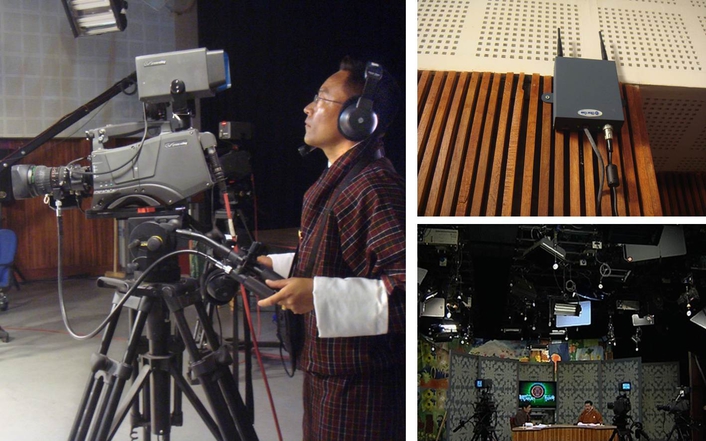 The Tempest system is installed at a second production studio in a separate building. Tempest2400, which operates in the 80 MHz of spectrum in the 2.4 GHz ISM frequency band, where it does not interfere with the studios’ wireless microphone or in-ear monitor systems, which utilize the UHF band. Further, because of its Frequency Hopping Spread Spectrum (FHSS) technology, the Tempest system does not compete with signals from other 2.4 GHz wireless devices in the vicinity as well.

Along with the mobility, flexibility and interference-free communications offered by these wireless intercoms, BBS also finds the grouping function of the FreeSpeak and Tempest systems to be useful. The staff can easily assign groups to channels A and B, allowing the crew to receive only the cues for their department without having to listen to those that are not relevant to them.

“We are proud that the top broadcaster in Bhutan expanded its communications setup with Clear-Com,” says Edmund Song, Regional Sales Manager, Southeast Asia. “The ability of both FreeSpeak and Tempest to provide reliable wireless communications makes the systems ideal for fast-paced productions such as those produced by BBS.”