Clear-Com is on Hand for ITV's Emmerdale 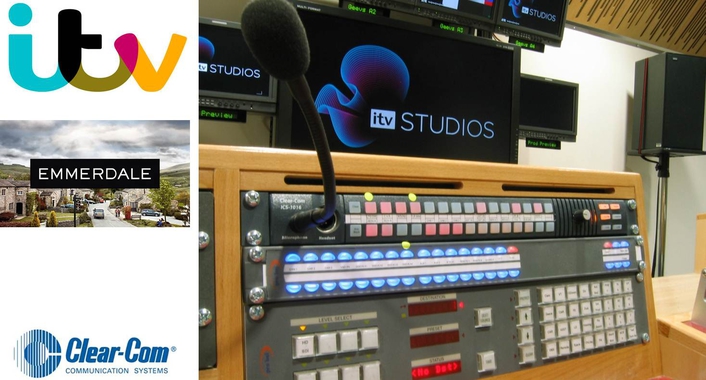 Eclipse Matrix with V-Series Panels Offer Reliable, Upgradeable Technology in Network’s New HD Studios
Clear-Com intercoms play a starring role on the long-running British soap opera Emmerdale. The show, which is filmed at ITV’s new HD complex in Leeds and on location in Northern England’s Yorkshire Dales, has been a longtime favorite in the country. Production team members for the soap, which airs six episodes a week to an audience of almost 10 million, employ the Clear-Com Eclipse-Median digital matrix intercom, V-Series panels and ICS-1016 digital intercom stations to ensure immediate access to fast, reliable communications across the ITV complex’s various studios.

The size of the new Eclipse system, which is larger than ITV’s previous Eclipse-PiCo system, allows the Emmerdale crew to communicate between the five studios and two production galleries at the ITV complex. The system, which has been in place since the first day in the new complex, is also expandable. This enables the team to incorporate functions to meet more communications needs as they arise in the future.

“With both a quick move and production schedule, we needed a talkback system that would be flexible enough to meet our needs as we grew into the new complex, while also being immediately recognizable to the crew,” says Steve Ridley, a senior engineer at ITV.

“While the PiCo system worked well for our original studio, when we moved to the new location we wanted something that gave us the same capabilities with an increased channel count. Also, because of our tight shooting schedule, we had to move straight into our new studios with minimum downtime. So, we had to have a talkback system already in place rather than try to move and reconfigure our existing equipment. The Clear-Com Eclipse Median proved to be the perfect product, with great customer support and an affordable price tag.”

Centrally located in the station’s main apparatus room, the Eclipse Median is a four-wire system with connections to cameras, the ICS-1016 digital base stations and other analogue sources. The standard port-wired panels are used in the control rooms, but the team takes advantage of the system’s network connectivity and V-series panels to run communications between any of the floors within the complex. With the voice-over-IP capabilities available for the Clear-Com Eclipse system, ITV also has the option of upgrading it to include Concert’s collaborative workgroups feature over LAN, WAN and Internet, if and when it is needed.

“The combination of the Eclipse digital matrix with V-Series panels is ideal for ITV’s production of the hit show, Emmerdale,” says Dan Muchmore, Clear-Com Regional Sales Manager for the UK and Ireland. “The Eclipse-Median offers not only a tremendous amount of communications flexibility, but also the capability to expand the system as the station’s needs change. We look forward to helping ITV and Emmerdale grow and expand even more at its new home.”

About Clear-Com®
Clear-Com®, an HME company, is the global market leader in critical voice communications systems for professional productions. Since 1968, Clear-Com has developed and marketed a comprehensive range of analog, digital and IP-based wired and wireless intercom technologies for party-line and point-to-point communications. Recognized for our legacy of intercom innovations, production teams around the world have come to depend on Clear-Com for clear, reliable and scalable communication solutions.