HSL supplied 24 Sharpy units to long term Chase and Status lighting designer Neil Carson of Enhance Production Ltd for the band’s UK Autumn 2011 tour, which culminated in the live video shoot at Brixton Academy. Carson’s show has since been submitted for a Knight Of Illumination Award 2012.

The show was in your face energetic, video heavy and punctuated with Carson’s high-energy, punchy light show. “As one of the top-selling bands of 2011, Chase and Status wanted to deliver a seriously dazzling show,” explains Carson, who has worked on previous Chase and Status live shows. “I spread the Sharpys across six towers and rigged them at various heights so that I could really hit the audience with the onstage atmosphere from Chase and Status and the huge video backdrop.”

Carson wanted a fixture that could give him the speed and intensity he needed but could also deliver a palette of effects in one fixture. “We also wanted to give the show a big arena atmosphere, regardless of the size of the venue,” he continues. “The combination of the various lighting angles and heights with the architectural intensity of the Sharpys gave us this and much more.”

With an unprecedented brightness the Clay Paky Sharpy produces a perfectly parallel, laser-like beam that is sharply defined and free of any halo or discoloration. It offers 14 different colours and 17 gobos, ensuring the designer can easily change the shape of the beam to create an array of spectacular mid-air and onstage effects.

Pio Nahum, chief commercial officer for Clay Paky says: “We are delighted by the speed with which the Sharpy has become the fixture of choice for talented young lighting designers all over the world. The imaginative way designers like Neil Carson have incorporated it into their designs has been very exciting and we look forward to seeing much more of this in the future.” 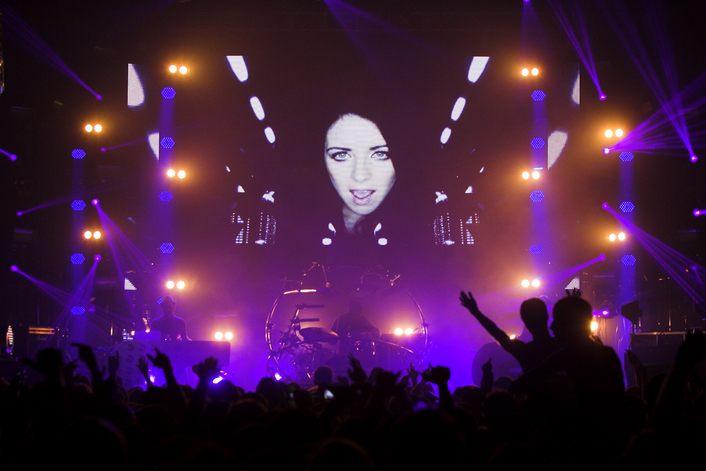