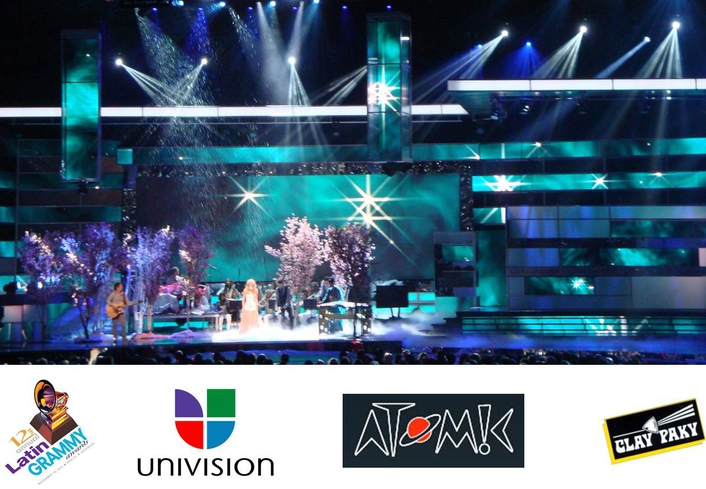 Colina deployed the Sharpys on trusses over the stage to create beam looks and also placed the fixtures around the audience
Atomic Lighting of Lititz, Pennsylvania, the exclusive lighting supplier for the second consecutive year to the Latin Grammy Awards, recently provided the show with 50 Clay Paky Sharpy fixtures.

Latin music’s most prestigious awards telecast, the 12th Annual Latin Grammy Awards was sent live on Univision Network on Nov. 10 from the Mandalay Bay Events Center in Las Vegas.  Since its debut on Univision in 2005, the show has consistently increased its ratings worldwide; and is the most widely watched awards show among Hispanics.

Atomic’s vice president of operations Brett Puwalski, who has served as the show’s gaffer for the last five years, introduced lighting designer Carlos Colina to the Sharpy at the Premio Juventud awards show on Univision last summer.  “He loved the tight beam and how bright it was for its small size,” says Puwalski.  “Carlos has said he can never have enough of them.”

Colina deployed the Sharpys on trusses over the stage to create beam looks and also placed the fixtures around the audience to illuminate shots for commercial bumpers.

Weighing just 16 kg, the tiny 189W Sharpy produces a perfectly parallel, laser-like beam with an incredible output of 5,100 footcandles at 65 feet.  The pristine beam is sharply defined and free of any halo or discoloration around the edges.  The fixture offers interchangeable color and gobo wheels, allowing users to change the shape of the beam and create an array of spectacular mid-air effects.

Puwalski reports that Sharpys are “definitely the hot light to use right now.  But people are finding them hard to come by since they’re constantly in use.”  He notes that “Clay Paky pretty much innovated the beam light, and Sharpy is by far superior to similar fixtures on the market.  For a fixture that small and lightweight, Sharpy performs like a lamp that’s way brighter.” 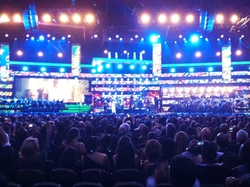 Francesco Romagnoli, Clay Paky Area Manager for North and Latin America, adds, “We’re very pleased with the way our lights have been used for the Latin Grammy Awards.  Atomic Lighting has always been a great customer and continues to find innovative applications for our lights.”

John Daniels and Darren Langer were the lighting directors for the Latin Grammy Awards; Alex Flores, Dave Hunkins and Mike Smallman the lighting technicians; and Felix Peralta and Kevin Lawson the lighting programmers.